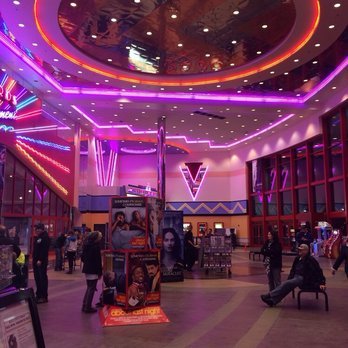 The Edwards Boise 22, which opened in December 1997, was Idaho’s first megaplex and still is the largest. It was followed by the IMAX two years later and was the start of the theater boom in the Treasure Valley. James Edwards often travelled through Boise on his way to Sun Valley and being a veteran theater operator for 65 years he could see that the Boise market was underserved. At the time Boise was beginning to grow and people were moving to the area from other states, California included. He had recently opened his 21-screen and IMAX complex in Irvine, California so he simply took the model and transferred it to Boise, which of course is known for its colder winters. Keeping the geography in mind about the only change would be an enclosed outer lobby and box offices but otherwise this theater could be in Irvine or Ontario, California, where Edwards made news when he went up against AMC. In Ontario he lost out in the competition to build at the Ontario Mills so he bought land 900 feet away and built his own theater, which resulted in 52 screen and an IMAX within a block. His so-called feud with Stanley Durwood, the founder of AMC, may have been made-up. This culminated in a 1997 article in Fortune Magazine called “My Megaplex is bigger than your Megaplex.” The article painted them as rivals, with each claiming to have built the first multiplex. In the article Edwards was perhaps jesting his friend when he said “Stanley Durwood is an even bigger prevaricator than I am".

James Edwards was interviewed by the Orange County Register on September 25, 1990. He said that he was born in 1906 and opened his first theater in Monterey Park, California on October 9, 1930 when he was nearly 24 years of age. By 1963 he had 10 San Gabriel Valley theaters listed in the Los Angeles Times.

In the early-1960’s, he was in his late fifties and planned to retire to the quiet life in Newport Beach, California. Even in retirement Edwards couldn’t keep out of the movie business so he built the Edwards Cinema in Costa Mesa, which opened in time for Christmas 1963 and from then on there was no stopping. During this second act in his career Edwards became a well known figure in Orange County and Southern California. He fielded many calls to sell out to national chains but more often he was the one to buy out their locations.

His flagship theater was the “Big Newport” in Newport Beach where his general offices were located on the second floor. If one were to go to a matinee there Mr. Edwards would probably be the friendly greeter and ticket taker. For years he kept one of his fully restored antique autos on display in the lobby.

At its peak Edwards Theatres had 50 theaters in Orange County, which isn’t counting the later ones in Los Angeles and all the surrounding counties and beyond, even to Fresno. Having so many smaller venues when multi-stadium theaters, of his and of other chains, were the emerging standard may have been the chain’s downfall. They just had too many smaller theaters with long leases that began to underperform.

Unfortunately Edwards passed on in 1997 before he could see his new Idaho dream come true. But Boiseans overwhelmingly welcomed this new theater to the valley. Since then Regal Cinemas, the buyer of Edwards Cinemas after their bankruptcy, have opened in downtown Boise, two complexes in Nampa and one near Idaho Falls in Ammon.

You’re right Mike, someone should and is commenting about James Edwards, founder of Edwards Cinemas. :)

I had the privilege of working for the Edwards family and being one of their “go-to” employees during the 80s. The Edwards, in particular “Mr.(James) Edwards”, were and are very generous people and family oriented.

“Senior”, a nickname we used to distinquish between him and his son Jim (III), were always customer service driven to provide the ultimate in cinematic experience. They truly strove to make sure customers left feeling with a memorable experience; not just hopping in the car to a show and then ho-hum. Rather, something on par of a sporting or concert event.

And the Edwards also bent over backwards to make their employees feel just as important and welcomed- regardless of the employees' positions; everyone was equal, top to bottom.

The reputation Edwards had as an employer was known far and wide and not just through out the NATO (National Association of Theater Owners) trade organization. Often working at Edwards Cinemas was compared to working with the L.A. Dodgers. For those not in the know, back in the day, the Dodgers were considered one of the best family businesses, and businesses in general, to work for in America.

The process owners Walter and Peter O'Malley used to operate their businesses and interact with employees was positively spoken of by their hired hands, as our employees; young, out of college or veteran management and our “bookkers” off of Robertson near Beverly Hills.

But… W. James Edwards II, who Ron interviewed, was best known for the following comment: “A man is only as good as his word.” Every employee knew that at the end or their interview or prior to signing the employment application. And, thus, was the line all employees towed and the basis of their future at Edwards Cinemas and perhaps their future actions in life.

Mr. Edwards was FIRM, but FAIR. No one, from employees to his picture licensing/lease agreements to real estate leases, for land his theaters and drive ins sat, ever got a “raw” deal. He was a man of his word. He was respected and the studios always took his calls.

This was best displayed at his service when all the studio chiefs attended the memorial; Something never done before and not since.

Jim did “stand door” and take tickets. He was never too good for any job; even sweeping! He never ostracized anyone for serving the customer and encouraged asking when in doubt. He believed in his employees, their inititive and encouraged participation so he could reward them with promotion as early as possible (fostering more employee pride and vested interest in the business). He believed in self worth and genuine values/high morals.

People like myself, and there are many who engaged Mr. Edwards, don’t do and think about something daily that isn’t attributed to our blessed, fun and rare experience, from working with the Edwards family and former co-workers. Those times and qualities are rare and cherished.

Trivia: Yes, Edwards was the pioneer of the multiplex; The Big Newport had the largest indoor screen West of the Mississippi, for a long time: 40 x 80 feet; Slogan: Edwards Cinemas, where the best pictures play; And the Monterey was Edwards first purchase, because he was turned down for a job at age 16 by the, then, owner who ended up working for Edwards in 1930 at the close of the sale!

Mr. Edwards was self-made and had several businesses prior to theaters, including Edwards Auto Parts which he started from scratch and sold within a year or two for profit.

He was a multi-faceted man of talent. Many of the motion picture exhibitor agreements of today have language/concepts created by Jim Edwards from days gone by.

His creativity was passed to his children: son Jim and daughter Joan began experimenting with new foods and beverages in addition to traditional concession.

Coffee, gourmet food and pizza kiosks, and lounge areas were introduced to complete the movie experience as a “one stop shop”. What worked at one theater didn’t always at others. But provided the customers convenience, kept their business at the venue and gave them more options, personalization and awareness to their tastes and needs.

Also, leasing the auditoriums out for business, social and educational events during the day, provided stronger bonds within the community and awareness outside the area for future marketing events.

I’ve been wanting to visit the Boise and Houston, TX theaters since the blueprints were created. Hopefully I’m supposed to be in those cities in a couple months. Many of us working here in So. Cal. never had the opportunity or made time to do so. Even Fresno, I never visited those!

Thanks for a great article on a man with an imagination only limited by the size of his heart. A heart that was limitless.