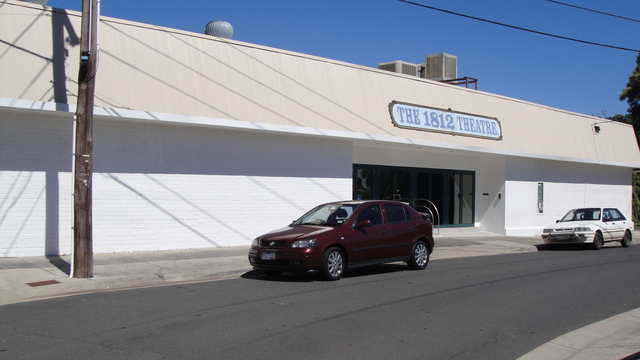 Located in Upper Ferntree Gully on the extreme eastern edge of Melbourne. The Loyalty Theatre was opened as a cinema in 1939 with 376 seats. It had a modest Art Deco style design, and seating in the single floor auditorium was increased to 409 by 1960.

It was briefly re-named Festival Theatre before it was closed in 1971. It stood empty and unused for around eighteen months. The local repertory theatre group, The 1812 Theatre (so named as they were located in a building at the intersection of Route’s 18 and 12 in Lysterfield), took over the almost derelict building in November 1972 after their premises were burnt to the ground on 2nd June 1972.

The 1812 players perform popular plays with tickets sold by subscription. In recent years, an adjecent building which once housed a bakery, has been converted into an additional performance space.

UP DATE – Greg Lynch says – The village of Upper Ferntree Gully nestles in the foothills of the Dandenong Ranges, During the early 1930’s this was a popular spot for large numbers of holiday-makers and weekend travellers who stayed overnight in local boarding houses and cottages. It was only a matter of time before a purpose built cinema was built. A search of Public Building Files reveals a submission of application for building a theatre in Rose Street, under the name “Loyalty Pictures” dated 25/09/1939. Approval was granted that same year to the applicant C. Spalding..The Loyalty Theatre (clad in A/C sheeting) was built in 1939 with 376 seats, by Charlie Spalding who became the owner / operator until 1950. The theatre’s original screening policy was Mon / Wed / Fri / Sat with a special Sat matinee. It was necessary to book for Saturday nights at least one week in advance. The Australian Film Weekly dated Feb 23, 1950 tells us that Charlie Spalding sold his theatre while on a holiday to the UK to Messers LC, and HW, Peters. The Peters Brothers ran the theatre from 1951 to 1959. – By 1960 the capacity had been increased to 409. In Jan 1960 there was a change of exhibitor as Roy Farmer took over the running of the theatre, while at the same time operating the Electra theatre, located in the adjacent suburb of Boronia. Roy Farmer ran “The Loyalty” until 1971?. During this period there was a sub lease arrangement with the talented Rob (sprockets) Weybury, who installed a theatre organ and personally performed nightly for patrons in the style of the traditional grand picture palace, regretfully it seems to indifferent box office. – NAME CHANGE – The cinema now showing it’s age was re-named “The Festival Theatre” and was run for a short time by hopeful industry identities, Len Harvey & Eric Yeomans – The old cinema after 32 years of entertaining a generation of local film-goers was finally dark, later to emerge after a major re-build as The 1812 Theatre. For the people of the Upper Gully and surrounds (this writer is one) “The Loyalty” was a special place, a meeting place, a place of dreams….

Greg Lynch says – Wally Tew (Major Achiever) was an Assistant Projectionist at the Loyalty during the early life of the theatre, working under the guidance of the owner / exhibitor Charlie Spalding. – This involved making up the various program changes, showing the advertising slides and assisting with the projection. Wally went on to serve as a councillor for 23 years, including four terms as mayor. He was the last Shire President of the Shire of Knox. He told this writer that his swan song would be the moving of the Knox War Memorial from (the old school) corner of Dorset Rd & the Burwood Highway to the new Arboretum. This he achieved with much style, which included an impressive fly over and a marching band..A video production exists of the dedication, which can be obtained from the City of Knox council library…