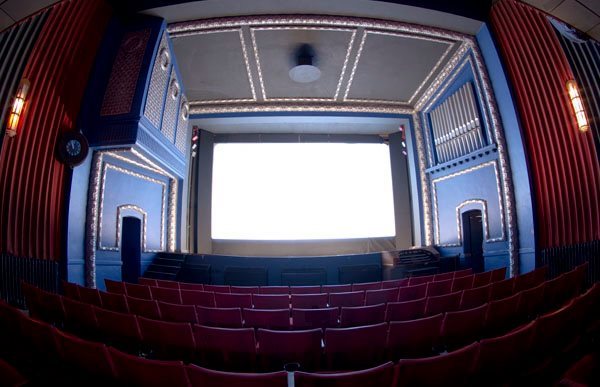 The Strand Theatre was opened in 1916 and has been in continuous operation ever since. It was twinned on June 10, 1982. In May 1986 it became a triple screen theatre. By showing a mix of first-run, foreign and art films, the success of the Strand Theatre will continue for another 86 years.

The Strand was part of the Schine Circuit in the early sixties.

Hmmm, I don’t think the Strand could have been Art Deco/Moderne when it opened in 1916, since what would later come to be called Art Deco didn’t develop until the 20’s.

It would be interesting to find a photo of the interior from that period. The exterior of the building has the feel of Federalist style, but interior may have been Art Nouveau, which is sometimes confused with Art Deco.

It looks like efforts are underway to give this theater another makeover: View link

The official web site of the Strand Theatre has moved to this URL.

Delaware (where, incidentally, director Vincente Minnelli was born in 1903) has always been a small town, and the Strand has probably been its only large theater. Thus, the item headed “Fine New House at Delaware, O.” in the January 8, 1916, issue of The Moving Picture World must have been about the Strand. The item said the new theater was under construction and was expected to open about April 1 (the Strand’s official web site says it actually opened on April 10.) The Strand Theatre was designed by Columbus architect Fred W. Elliot.

Our digital conversion was complete Aug. 3, 2012. Work is currently going on to provide new restrooms for our patrons. We are looking forward to our 100th year in 2016.

The Strand was originally an all-first-run theater throughout the first eight decades. It was twinned on June 10, 1982, and was tripled in May 1986.