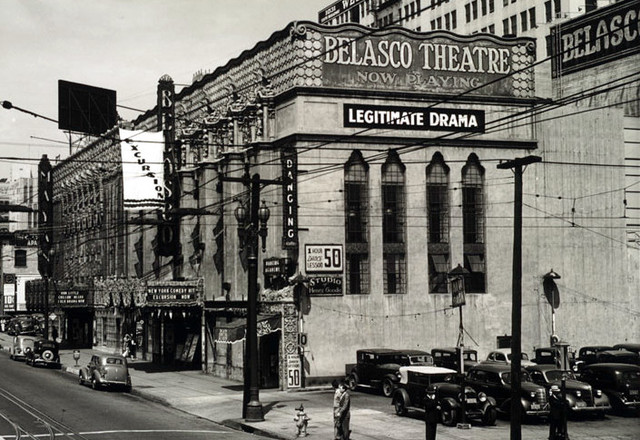 Petroleum magnate Edward Doheny developed this and the adjacent Mayan Theatre (same architects-1927) as part of a new legitimate theatre district, which he hoped would augment or replace the older theatres on North Main Street, in downtown Los Angeles.

The Belasco Theatre was the first of the two to be completed. It was built as a legitimate playhouse and was operated by the Los Angeles based producer Edward Belasco, brother of New York based David Belasco. The Belasco Theatre opened on November 11, 1926 with the stage production of Anita Loos comedy "Gentlemen Prefer Blondes". It is interesting to note that until around 2006, when the exterior of the building was repainted, the original (by then faded) painted sign on the side-wall of the stage house could still be seen with the words; ‘Belasco Theatre’ "Gentlemen Prefer Blondes".

The exterior of the theatre has an exotic Spanish Conquistador theme, with a series of seven figures of conquistadors, set in pineapple shaped niches across the top of the facade. The lower section of the facade originally had decorative features, but these were removed in a remodeling, and the area is now plain.

Above the lobby is a large ballroom which can accomodate up to 400 persons, and the theatre also has an expansive ‘green room’ for the artistes. Inside the shallow auditorium, seating is located on orchesta and balcony levels. It has a gold gilded decorative scheme in a Spanish Renaissance/Moorish style, with a huge shallow domed ceiling, which again is highly decorated.

The Belasco Theatre was mainly used as a playhouse and hosted successful productions starring the likes of Helen Hayes and Tallulah Bankhead. However it briefly screened movies mainly of the exploitation type, accompanied by burlesque, for a two year period between 1948 and 1950.

The Belasco Theatre was closed in 1952, as the area began to become run-down. By the 1970’s it had become the Metropolitan Community Church (a gay church). The moved out of the building by 1984 and the building remained closed and empty. It occasionally was used as a location for a film shoot, including the 2001 John Travolta movie "Swordfish". There were plans proposed in 2002 to convert the building into a nightclub, like the adjacent Mayan Theatre but this was not done.

Almost $10million has now been spent renovating the Belasco Theatre and it re-opened as a live and events venue on March 19, 2011. In January 2020 it was taken over by Live Nation.

The Belasco Theatre is designated a Historic-Cultural Monument.

If this theatre was not built to show films and only screened them for a short time, then it really isn’t a ‘cinema treasure’ and doesn’t belong on this site. It’s a beautiful building but not a cinema.

In the case of the Belasco, it showed films over the course of at least four years. Isn’t that enough to get a listing here? People have history with this building and seeing movies there. It’s better to be inclusive.

What’s the problem, is the Internet running out of space or something?

The policy here at CT clearly favors inclusion rather than exclusion. There are some entries here on CT that are not even theater structures in the strict sense – such as the Detroit Film Theater and the Cleveland Cinematheque. Recently someone posted a park were apparently a film was shown once or just a few times (I thought that one was a bit dicey, though). It would hardly surprise me if other buildings built for legitimate theater especially in the 1920’s or before showed a film or two from time to time. Theaters listed here include those originally built as a barn, a factory, a cafeteria, and a gas station, to say nothing of the not inconsiderable number of theaters that were storefronts. There are also a few listed theaters that showed films for periods of less than four years, so a place’s original purpose and length of time as a film exhibition site are not necessarily factors that would prevent it from appearing on CT, nor does the type of film shown necessarily exclude a location.

I want to congratulate everyone involved with the Belasco’s absolutely stunning renovation. The theatre is lovely, and I’m excited to see how it thrives from this point.

Photographs from the LAHTF’s “All About… The Belasco” tour are in abundance on Flickr.

It’s used primarily as a nightclub and for special events.

It was the restored Belasco that the royals visited: http://www.nbclosangeles.com/news/local/William-and-Kate-Visit-LA-125244584.html

What a beautiful theater. I hope concert audiences dont ruin it!

I hope this theatre is added to the Last Remaining Seats film series held each year. What a beautiful place to see a vintage motion picture.

LawMann, I think it’s possible, but unlikely. The seats have been removed and the floor leveled to make it into a nightclub/live performance venue. Not only on the main floor, but also in the balcony. True, LRS screened a movie at the Wiltern and had to bring in folding chairs for the main floor, but the large balcony was intact. With limited seating in the balcony, I don’t know what size audience the Belasco could handle—and that’s a key factor in picking venues for LRS.

Something you might consider: join the LRS committee and make a pitch for using the Belasco. They will consider it. I pushed for screening “King Kong” at the Shrine where the Kong on display scenes were filmed. Unfortunately, the financial details didn’t make sense, and it was shown at the Los Angeles instead. Maybe you’ll have better luck than I!

The Belasco, The Mayan, The Orpheum, The United Artist – now Ace Theater, The Palace, and the Los Angeles Theater are all in great condition and benefit from a thriving gentrification of downtown Los Angeles. Billions of dollars are being invested in new residential and conversions of old hotel and office buildings to residential; the streets have come alive. Nightlife is flourishing and downtown LA is now hip, vibrant, and growing again. Unfortunately, downtown’s skid row and the thousands of homeless along with the blocks upon blocks of encampments bring a stinging blight and a sense of concern for one’s safety that mars this otherwise incredible revitalization of downtown Los Angeles.