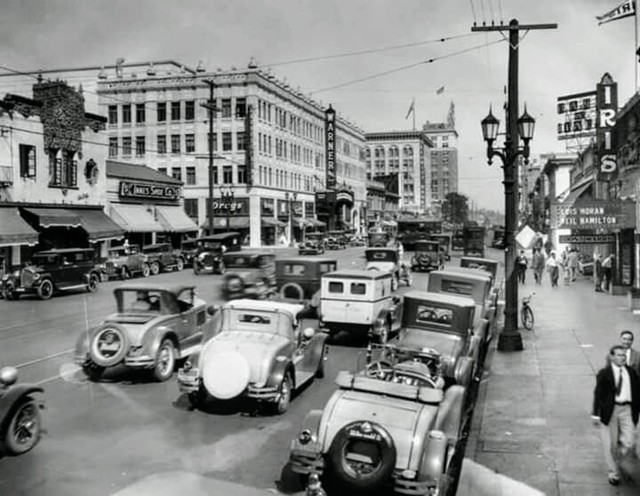 Soon after opening it was renamed Iris Theatre. The Iris Theatre was so successful, that Tabor built a new Iris Theatre across the street in 1918. The old Iris Theatre was possibly demolished when construction began in 1927 on the Hollywood Warner Theatre (later Pacific). In 2009, the site of the first Iris Theatre is an empty plot to the east of the Pacific 1-2-3 Theatre near the corner of Hollywood Boulevard and N. Cahuenga Boulevard.

As a footnote; The second Iris Theatre (which has its own separate page on Cinema Treasures) was renamed Fox Theatre on December 20, 1968, and closed in 1994. It stood empty and unused for over ten years, and was converted into a nightclub/bar.

It could be that the Hollywood Lutherian Church held their meetings in this building, rather than the ‘new’ Iris Theatre across the Boulevard.

In the 1915 city directory, the theater was listed as the Iris at 6417 Hollywood Blvd.

The Idle Hour Theatre is listed in the 1913 city directory, but the address was 6524 Hollywood Boulevard, which would be on the south side of the street west of Wilcox Avenue. In the 1914 directory, the same address is listed as the Iris Theatre. As kencmcintyre noted, in the 1915 directory the Iris is listed at 6417 Hollywood.

The March 28, 1914 issue of Southwest Contractor notes a 450-seat theater to be built on Hollywood Boulevard between Cahuenga and Wilcox (the 6400 block) for Miss De Longpre. As the Iris is first listed in the 1915 directory and is the only theater in the 6400 block of Hollywood Boulevard, I think it must have been this project. The item says that plans had been prepared by E. Fossler, who also had the contract to build the house. Other issues of the journal indicate that Fossler was primarily a builder and contractor, not an architect, but it’s possible that in 1914 builders were still allowed to design projects, or his firm, which was quite busy, might have had an architect or engineer on its staff.