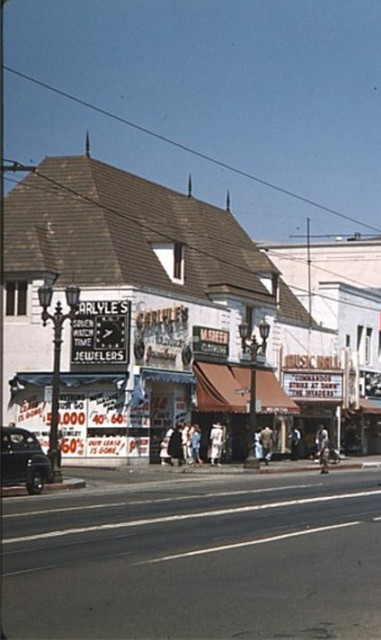 The Holly Theatre is perhaps best known for premiering and exhibiting “Caligula” exclusively for over a year in 1980-1981, and is located across Hollywood Boulevard from the Fox Theatre.

Converted from a garage by architect S. Charles Lee for operators Harold Frankin and Howard Hughes, it had 303 seats and was originally named the Studio Theatre. Opened on 31st July 1931 with Charles Starrett in “The Viking”. It was the first ‘automatic’ theatre in the area, having no ushers, just a cashier, a manager and a projectionist as staff. Patrons passed through a turnstile after purchasing their tickets, which operated automatic doors. Candy, cigarettes and drinks were sold via coin operated slot machines. The Studio Theatre was billed as the ‘World’s Most Unique Theatre’.

On December 9, 1936, it was renamed Colony Theatre screening Bing Crosby in “Rhythm on the Range”. On August 8, 1945 it had changed names again to Music Hall, Hollywood playing Burgess Meredith in “Story of G.I. Joe”. By then the seating capacity had been increased to 488 after a remodelling. By the mid-1950’s, it was known as the Academy Theatre.

It remained a first run movie theatre and became the Loew’s Holly Theatre on June 20, 1970, when its Art Deco style interior was curtained over and a false ceiling was installed. The reopening movie was “Watermelon Man”. Soon it became the Holly Cinema, and the notorious Penthouse production of “Caligua” broke box office records.

It was converted into retail use, at one time becoming a shoe store, and since 2004, was used as a Scientology Learning Center. All traces of its cinematic past have either been removed or covered over. By early-2020 it was operating as Harold’s Chicken & Bar.

The Studio Theatre was to have been the first of ten houses of its type for Hughes-Franklin Theatres according to this item from Building and Engineering News of December 5, 1931:

“CALIFORNIA— Harold B. Franklin, president of the Hughes-Franklin theatres. 7051 Hollywoood Blvd., announces that plans are under way for nine new theatres, similar in size and type to the recently completed Studio Theatre at Hollywood Boulevard and Hudson Avenue, to be built in San Francisco, Berkeley, Sacramento, San Diego, Oakland, Stockton and San Jose. Calif.; Phoenix, Ariz.; and Dallas, Texas. They will have seating capacities ranging from 300 to 500 and will have the automatic features provided in the Hollywood Theatre. S. Charles Lee, 2404 W. Seventh St., Los Angeles, will be the architect.”

I don’t know if any of the other theaters were built.

Google Street View from February 2014 shows a “For Lease” sign on the Scientology store at this address.

Are you sure you have the right theatre? This address was never a bookstore.

Photos via Google Maps (streetview) from 2007 through 2013 show the building was used as a Scientology Test Center.

Photos from July of 2014 through 2017 show the building as being empty/vacant.

Your post stating it was a bookstore now was written in July of 2019 and it definitely wasn’t a bookstore then. In fact, I can find no record of this address (6523 Hollywood Blvd) EVER being a bookstore.

I worked at the Holly as the manager for two full years in the mid 1980s, and thus I’ve been keeping tabs on it.

Ed Collins: It was likely a misunderstanding from the Scientology Test Center occupancy. I recall them having L. Ron Hubbard/Scientology books displayed in the windows, in the sort of fashion which could easily be mistaken for a bookstore when driving by.