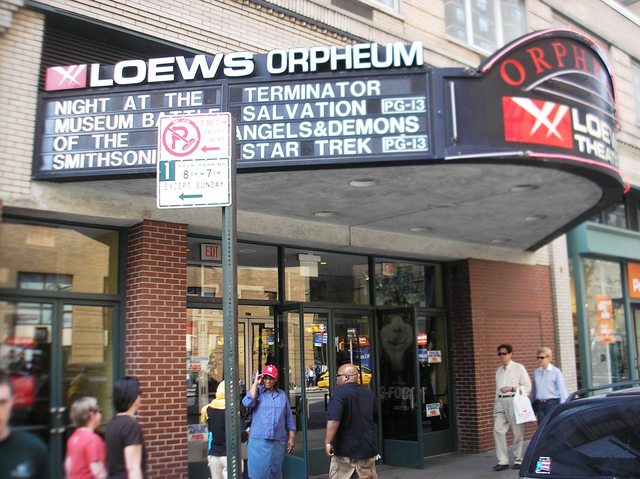 Located close to E. 86th Street at 3rd Avenue, and built on the site of the Loew’s Orpheum Theatre designed by architect Thomas Lamb, which opened in 1914 and closed in 1989.

They did make them more plain unfortunately as time went on. My favorite was the Loew’s Sunburst design & RKO Zig-Zag style. I only shudder to think what we will be left with once they finish the AMC signage swap out project. Because of the whole Loews-Sony-Loews name swap in the nineties there was very little Original Loew’s lettering left anywhere.

Looks like I have to hurry and re-photograph all the Loews marquees before they’re gone. While I can understand the idea of a consistent identity plus the ego of buying a chain, I wonder if AMC did any research into which brand was better liked by the public, Loews or AMC. My bet is that at least in NYC, Loews would have come out on top. Sony learned this lesson years ago.

I know that. Most people thought that Sony killed the Loews brand during its control of the chain from Coke in 1989. Tristar owned the theaters starting in 1985 in a joint venture with CBS and HBO. The joint venture broke up but Coke kept the chain when it merged Tri-Star into Columbia in the late 80s until the Japanese electronics giant took over. During Sony’s reign, when Playstation came out, they had kiosks inside the lobbies of the theaters. Advertisements for Sony music would play in the theaters, and a majority of the theaters would use SDDS much like its competitor (and soon to be parent) AMC as well as show Sony’s movie studio slate. In 1997, Sony reverted back to the Loews name and merged it with Cineplex Odeon; that relationship lasted a short time before Chapter 11 came along, forcing private companies to take over the chain. In 2006, Loews merged with AMC, and the rest is history. Loews was owned by the tisch family when they took control of the chain after it was spun off from MGM in the late 1950’s in 1969, and it became a huge conglomerate that owned everything from hotels to cigarettes and watches.

The first multiplex that opened under the Loews brand when they decided to drop the Sony nameplate was the Loews New Brunswick 18 in New Brunswick NJ in November 1996, the Sony Theatres name switch was announced in April 1994 so it lasted approximately two and a half years. I wonder what the cost was to change all the signage from Loews to Sony, then back from Sony to Loews cost? Also AMC never had much of a presence here in the five boroughs so the Loews name definitely had more recognition in NYC.

AMC should really donate one of the neon Loews signs its in the process of getting rid of to The Museum Of The Moving Image in Astoria Queens for preservation purposes.

I gotta admit that would be pretty cool.

Wonder what Marcus Loew would think about the current use of his original building site, which has numerous images displayed here

Al Schwartz would also have a fit if he saw what happened to his beautiful Meadows in Fresh Meadows the demolition and rebuild of the Shore in Huntington.

Al Schwartz and Michael Landis were all about the money and could care less.