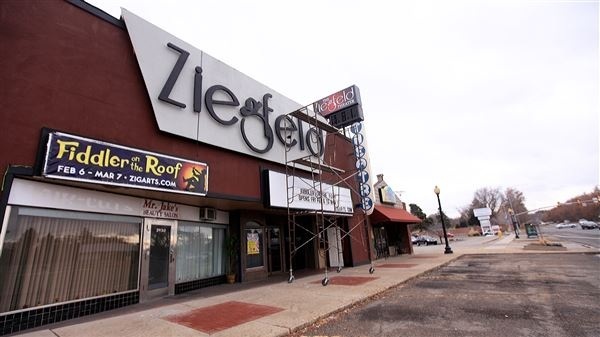 Situated near the country club in the incorporated city of South Ogden, the Country Club Theatre opened November 11, 1948 with the second-run Errol Flynn western “Silver River”, which had already played at Ogden’s Orpheum Theatre the previous May.

A later newspaper ad said “The Country Club Theatre is owned and operated by Weber County men. The projector machines are operated by the owners of the Company”.

A photo of the “modernistic” theater appeared in the Standard-Examiner on November 7, 1948. Building features included a large parking lot and a prescription center and offices for dentists and doctors. The interior included a barrel shaped floor which sloped gently to the center from both sides, which was said to eliminate distortion on the “Hugh” 15' by 20' screen. Other amenities include 4" of extra space between rows of seats, which were numbered at more than 500. A new theater innovation at the time, a cry room, was also listed.

The Standard-Examiner said that It received a total front to back remodel in 1970. During the 70s and 80s, with the closing of the older houses, it was a first-run venue in Ogden playing day and date most of the time with the drive-ins.
By 2001, it was a $1.50 or $2.00 house playing second-run films.

It is not known exactly when the Country Club ceased showing movies but sometime in December of 2004 listing stopped appearing in the Deseret New entertainment section.

It was playing live music, mainly punk, from early January to May of 2007 when it was closed down by the city and the business license suspended in response to complaints by surrounding businesses and neighbors.

In 2012, it was reopened as the Ziegfeld Theater, presenting live performances.

The Country Club Theatre has new owners, a new name and a new direction. Recently purchased by Caleb and Morgan Parry, whose Off the Wall improv comedy troupe has been performing at the nearby Terrace Plaza Playhouse, it will now be used for a variety of live theater performances — musicals, improv, interactive mysteries, live music and even occasional movies.