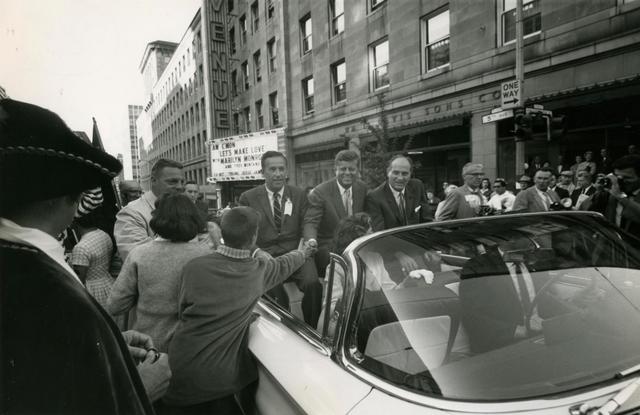 One of the most celebrated movie palaces ever built, the 5th Avenue Theatre opened in 1926. It was equipped with a Wurlitzer 4 manual 18 ranks theatre pipe organ. It closed as a movie theatre in 1978.

Im glad they finally after 30 years put a proper marquee back on the 5th Avenue. It seemed naked without a Marquee.This has made my day.brucec

The following article appeared in the August 2010 issue of Signs of the Times.

In February 2008, Cathy Johnstone, the 5th Avenue Theatreâ€™s (Seattle) director of facility operations, con-tacted us regarding a new exterior sign for the property. CREO (known as SignTech at that time) had fabricated its existing exterior signage back in the mid 1990s, and we participated in brainstorming discussions regarding a new, vertical marquee that we hoped to build when funding allowed.

She explained that a donor had expressed interest in funding a new marquee reminiscent of the vertical one that existed when the theater opened in 1926. Between February and July 2008, the theaterâ€™s management team invited CREO to preliminary discussions regarding various concepts for the new design. They wanted general guidelines regarding signage possibilities attainable with their available budget.

In July 2008, funding was secured, with the overwhelming majority derived from the donorâ€™s contribution. That budget required proportional distribution between design and fabrication/installation. For the $300,000 allocated to the project, design, electrical work, structural testing and electric programming required $100,000; fabrication comprised the rest.

The Seattle office of NBBJ, an architecture/environmental-graphics firm, designed its ideal sign based on client input and CREOâ€™s general guidelines. Then, CREO analyzed that hypothetical signâ€™s cost relative to the available budget. Some sign elements were non-negotiable: size, function and materials. For other aspects, CREO specified options and corresponding costs for budget optimization. After three design revisions, the team selected a design that achieved both the desired aesthetics while respecting budgetary limits.

The mockup also showed different animation options for the bulbsâ€™ illumination, chasing and scintillating functions. To ensure optimal readability, we viewed the prototype in daylight and darkness.

As fabrication began, we addressed programming the signâ€™s lighting. The sign required 12 different lighting regions, and the theater wanted maximum control and flexibility for illumination. The light show needed to vary for different theater events, which meant CREO had to deliver a fairly sophisticated, electrical-control assembly.

Consequently, CREO installed a subpanel that branches out all circuits and provides an astronomical timer control. The subpanel breaks the power into 12, 20A circuits. Eleven dictate the lighting scheme, and one manages the rotating â€œ5â€ atop the sign.

The electronic clock controls each circuit individually â€" turning them on and off appropriately â€" per client programming. The job required five or six lighting variations. Yet, the sign only draws approximately 60A when fully engaged.

The 10-ft.-tall rotating â€œ5â€ â€" essentially a custom, 3-D aluminum cabinet â€" looms as the signâ€™s crowning glory. A Dynapac Model L-350 rotator, which turns the sign at 4 rpm, powers the cabinet. The motor is indexed to stop in the same position whenever the power is turned off. Designing the structural connection and support for the Dynapac rotator presented an initial challenge, but once weâ€™d brought the engine in house, the plan unfolded fairly easily.

Expectedly, adhering to budget proved a consistent challenge. The LED S14-style, screw-in LED that provides chaser lighting provided the most significant budgetary hurdle. These were chosen because they mimic the incandescent bulbs often used for signage back in the â€™40s and â€™50s, but in a much more energy-efficient manner. The 1W bulbs will consume approximately 90% less energy than traditional, 11W incandescents.

The sign required nearly 2,000 of these bulbs, so they consumed a significant budget portion. This type of LED lamp, however, is relatively new. Finding an affordable solution with adequate testing and a good performance track record proved extremely difficult. After much research and analysis, the consultant team chose a foreign product. Unfortunately, we immediately encountered a larger-than-expected failure rate. We worked with the distributor, Action Lighting (Bozeman, MT), and received another batch of lamps just in time for completion. Despite the hassle, we met our clientâ€™s needs.

Sign installation was fairly involved as well. We first designed and engineered the signâ€™s attachment to the building. Finding accurate structural information about this nearly 100-year-old building proved challenging. Standards for building construction, materials and techniques differed a bit in the mid 1920s.

Ultimately, the main horizontal structural members, which run between vertical columns behind the buildingâ€™s stone faÃ§ade, proved substantial. A 5-ft.-tall, 2-ft.-deep, concrete structural skeleton supports each floor around the buildingâ€™s full perimeter. A seismic structural review, which occurred here (and at many older buildings) after the 2001 Nisqually earthquake, strongly influenced our attachment design.

We core-drilled test holes through the buildingâ€™s faÃ§ade to verify the location of the structural beams and test the concreteâ€™s condition. Luckily, everything proved compatible for our planned epoxy/stud anchoring system. After having determined the structureâ€™s location in relation to the stone faÃ§ade, we prepared three baseplates. We set each with 36, 1-in.-diameter, threaded rods, which we anchored with epoxy into the concrete building structure with Simpson Set XP epoxy. We welded the signâ€™s three, steel-tube supports to the plates.

We built and installed the sign in three pieces. We constructed the signâ€™s body in two segments, and the rotating numeral comprised the third. Because the theater resides on one of downtown Seattleâ€™s busiest streets, all installation phases occurred at night and were coordinated around a busy performance schedule.

Also, the installation happened near the holidays, so lane closures during the busy shopping season limited our working window. Fortunately, we completed the bulk of the install before Thanksgiving, but we performed some final minor assembly and touchups after the street-use restrictions had begun. For those tasks, we hired a roped-access crew to rappel from the roof and complete this work that otherwise wouldâ€™ve waited until after Christmas.

The 60-ft.-tall signâ€™s 0.125-in. aluminum shell, built entirely around a 2-in., aluminum-square-tube frame, was finished with Matthews acrylic-polyurethane paint. CREOâ€™s Gerber Sabre 408 router handled most of the flat-cut work. We finished the jobâ€™s more intricate cutting on a waterjet table.

The multiple lit regions include perimeter cove lighting that illuminates an ornately patterned face; halo-lit letters that spell â€œAvenue;â€ and separate detail cabinets at the top and bottom with push-through, acrylic copy. We illuminated all components with more than 2,000 Allanson Storm Tight LED modules in white and red. The LEDs are powered by 11 Sloan LED and 27 Advance Corp. 60W transformers.

We also populated the scintillating exposed lamps in the letters, and the two rows of perimeter chase lights, with more than 1,900, low-voltage, S-14, exposed-LED lamps. Design Specialties built the scintillation and chase units.

Our work yielded a luminous, vertical marquee that attracts even greater attention to this historic theater.

The Chris Farley film “Black Sheep” had a scene shot here, and gives a pretty good sense of the grandeur of the lobby.

This opened on September 24th, 1926. Grand opening ad in the photo section.

Back in the 60’s when I was stationed in Bremerton I visited the 5th Ave theatre many times. What a beautiful eddifice. Reminds me a lot of the RKO Memorial(now the Opera House) here in Boston. I believe the Boston theatre had more seats. At the 5th ave I remember seeing Dr. Doolittle(I should have saved my money) and other reserved seat 70mm presentations. My favorite film was when they showed a 70mm re-issue restored version of Gone With The Wind. My favorite theatre in Seattle for viewing was the Colisseum. Its ashame they didn’t preserve instead of turning it into the Banana Republic.

Nice picture of the new vertical blade in the photos section.

When I visitd Seattle in 2005 I had the opportunity to visit this eye-popping gem. The manager let me in for a quick peek and it is breathtaking.

There is so much to see and feel… As Lucy Ricardo once said, it’s like a bad dream after eating too much Chinese food, only in this case in a good way. Every surface is covered in something ornate, but I was especially impressed by the auditorium dome, which features a huge golden dragon. Even my 13-month old daughter broke into a big grin when I had her look up at it.

I am so jealous that people once paid 25 cents to come see a regular movie show in this dizzy den. In a word, wow.

A masterpiece of theatre style that has been lovingly restored and maintained to this day. Historic to the max.

Yes the 5th Avenue is a masterpiece. I have to agree with the gentleman that favors the Coliseum Theatre though. They had a very wide screen and the way it was designed was wide and shorter from back to front. Every seat was close to the huge screen. It would be great to restore the interior back to it’s 1916 or so interior. Elegant and detailed and one of the best theatres in history. At least the exterior is original. Bring back the rounded marquee too.