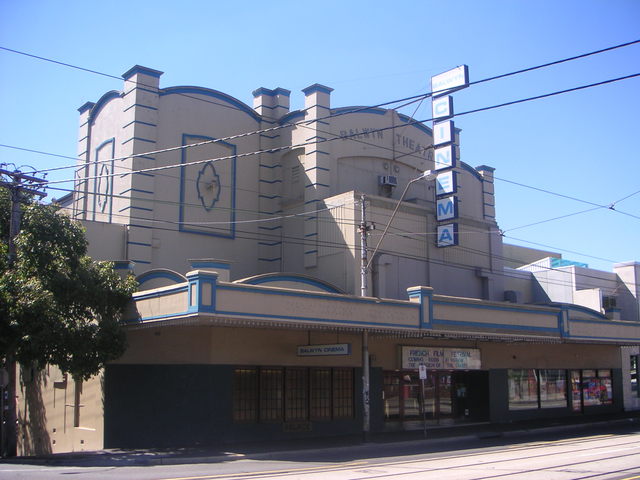 The Balwyn Theatre opened on 4th January 1930, in the Balwyn suburb of Melbourne. The opening film was Maurice Chevalier in “Innocents In Paris”, It had a seating capacity of 1,800 in stalls and circle levels. Over the years it has gone through several owners and also several name changes; Balwyn Classic Cinema and in the 1960’s to 1980’s the Balwyn International Cinema.

It was then taken over by Village Cinemas in June 1968 and re-named Balwyn Cinema. It was taken over by the current owners Palace Cinemas who converted it into a triple screen cinema in February 1994, and the seating capacity was reduced to 784. Two additional screens were built on adjacent land and opened on 27th June 2002. These two screens each seat 156 and the new building also houses Palace Cinemas head office. The facade has been retained, as have decorative details in the foyer levels and some original decoration survives in Screen 1, located in the former circle level. It shows mainstream and arthouse films.

Since 2016 Palace Theatres have upgraded the Balwyn Theatre and have added 60 screening room size auditoriums a 3 fully licenced bars. The new screening rooms each seat between 16 60 20 patrons and are located in an adjacent new building. The Palace Theatres head office headquarters have been moved to South Yarra. The new number of screens the cinema can play more choice of art house films.

Palace Cinemas has now invested in digital 3-D projection at both Balwyn and Dendy Brighton cinemas.Initial presentations will be “Journey To The Centre Of The Earth” starring Brendan Fraser.

When opened in January 1930, the Public Health department identified 22 building breaches. When the owners refused to comply with Health Department demands, the theatre was closed on 6 November 1931, and the owners went into liquidation. Balwyn theatre remained closed until the following April 1932.
Originally the circle was accessed directly from a staircase leading from the stalls foyer. In 1941 major alterations saw the construction of a mezzanine circle foyer and the addition of 2 more toilet blocks.