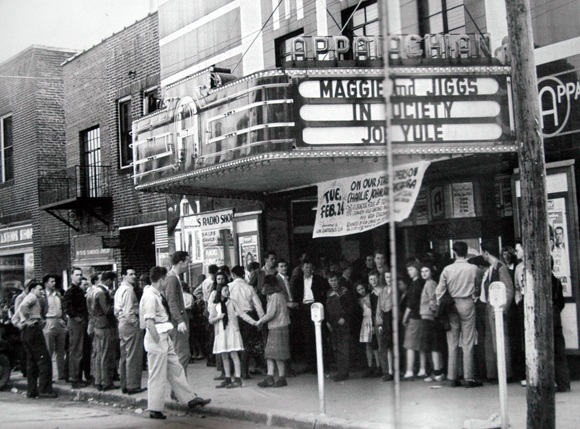 The 999-seat Appalachian Theatre was opened November 14, 1938 with the movie “Breaking the Ice” starring Bobby Breen & Charles Ruggles. The admission price was 25 cents for adults, 10 cents for children.

Gutted in 1950 by a fire started by overheated popcorn oil during the Saturday matinee of the film “The Trail of the Singing Pines” starring Gene Autry. The manager went to the stage to ask people to depart, but flames then shot out of the corners of the screen, and people stampeded out. It was restored/repaired and reopened and continued until 1981. It was taken over by an out of town movie chain and was later taken over by Carmike Cinemas and converted into the Appalachian Twin.

In 2008, a Florida developer acquired the building, stripping the building and then went bankrupt. The building sat closed and empty under the town ownership of Boone. In 2013, a non-profit was formed - the Appalachian Theatre of the High Country Inc. - they bought the theatre from the town and the fundraising began in earnest. In 2017, the distinctive mint green and black glass Art Deco style façade and neon marquee was restored back onto the building, winning a NC MainStreet Award.

On October 14, 2019 and extensive renovation of the rest of the building was completed and it reopened. While the interior has been reconfigured to incorporate onsite office space into much needed lobby space, considerable effort has gone into reclaiming that unique Art Deco style gleam. Once billed as “Western Carolina’s Finest Theatre” the newly renovated theatre will feature historic elements like a recreation of the original bold Art Deco style designed carpet from 1938 and restored multi-colored wall sconces.

Several film festivals are planned and a wide variety of performing arts events.

must’ve been some fire that forced the theater to rebuild as a twin soon after. Yet another twin theater in America that is being killed by the megaplexes.

anything going on with this theater??

any news on this theater/

I lived in Boone from the fall of 2004 until the summer of 2006. I saw some films at the Appalachian and while it was a bit run down, that was part of its charm. The balcony was converted into a second screen sometime back and really was one of the better instances of such a remodeling. Roomy enough with a kind of stadium seating and a decent size screen, much bigger than most megaplexes. One of the worst instances of balcony to screening room would be the Plaza Theater in Atlanta. During my time there, the general rule was if it played upstairs, I wouldn’t go.

Since I’ve left Boone, the Dragonfly Theatre has opened up, bringing what some would consider more art-house fare to the area. It’s apparently very active community-wise with art shows and concerts as well. Given it’s history, the Appalachian I hope will survive in some form, preferably the way it was left. You can’t buy that ambiance.

I’m thinking Consolidated had this theatre for a period of time… and Carmike got it when they sold out to them.

The Appalachian Theatre is coming back as a mixed-use performance venue for live theatre, concerts, and art house films. http://www.savetheapptheatre.com/

A souvenir program for the Appalachian Theatre gives the opening date as November 14, 1938.