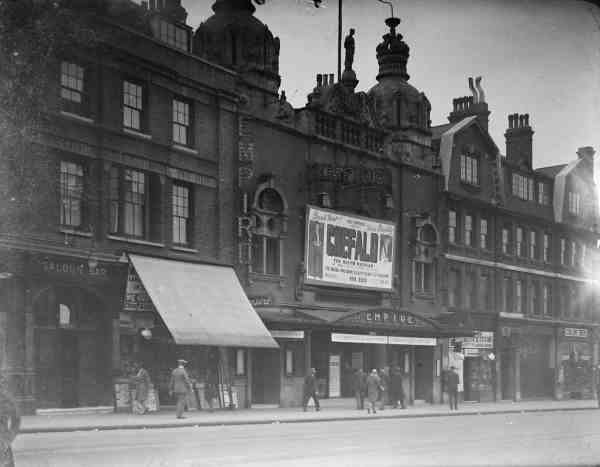 Located in the east London district of Hackney. The Hackney Empire Theatre of Varieties was designed by Frank Matcham and opened on 9th December 1901. Built by Oswald Stoll, it was originally planned to be the Number 1 theatre in the Stoll Theatres chain, but his Coliseum Theatre in the West End of London took that honour. It had an original seating capacity of 2,132 with seating in Pit Stalls, Orchestra Stalls, Dress Circle, Balcony and Upper Circle (gallery) and each area of seating had their own separate entrance. The theatre boasted an Oriental Tea Room on the ground floor as well as licenced bars on all levels. Although almost always used as a live theatre, the Hackney Empire Theatre of Varieties showed films as part of the variety bill from its opening night and through its early years and from at least 1914 it was a cinema on Sunday evenings screening continuous performances. It is notable for the inclusion of a permanent Bioscope projection box as part of the buildings' original design, one of the earliest examples of such a feature and this is located at the rear of the dress circle. A cinema screen (in Academy ratio) is part of the decoration in the centre of the safety curtain.

In later years a projection box was installed in the spotlight box in the dome of the ceiling, but this proved to be too steep an angle to give a satisfactory picture on the screen. A new projection box was installed at the rear of the gallery(3rd balcony) which was a little better. From this box a Western Electric(WE) sound system was fitted and from the late-1920’s into the 1930’s and the post-war 1940’s on a ‘Sunday-For One Day Only’ each week, double bill feature films were shown. This made use of the building on a day when live performances were forbidden by law.

The Hackney Empire Theatre operated as a variety theatre until closing in 1956 when it became a Television studio. The stalls seating area was raised up to stage level and became the studio floor, while invited audiences sat in the dress circle, participating in TV shows such as “Take Your Pick” with Michael Miles comparing, and the pop music show “Oh Boy!” produced by Jack Good, which featured Cliff Richard, Marty Wilde and many other pop stars of the day. In 1963 it was converted into a Mecca Bingo Club, which operated until 1986. Live theatre productions returned under the management of Roland Muldoon, and the theatre again became the entertainment centre of Hackney.

The theatre closed in the summer of 2001, just shy of its 100th birthday and it was extensively restored and reopened in 2004, part funded by the National Lottery. The original stage house was demolished to build a much larger stage house and back-stage facilities, but with its glorious richly decorated auditorium, with three balconies, returned to pristine condition. Unfortunately the original asbestos safety curtain was condemned and new one was installed, but happily the original painted design and cinema screen were recreated. A second small theatre space with a capacity for 120 was built on the site of a pub adjacent to the left of the main theatre, and this caters for small live theatre productions and rehearsal space.

It is the only original surviving theatre or cinema along Mare Street - once a centre of entertainment for the Hackney area. The Picturehouse Cinemas opened in 2011, almost opposite the Hackney Empire Theatre in the former Hackney Library building (it has its own page on Cinema Treasures). In April 2015 the Hackney Empire Theatre began screening a season of Oscar winning Classic film musicals, beginning with Charles King in “The Broadway Melody” (1929).

In 2019 the Hackney Empire Theatre was a location for several scenes in the film “Judy” (2019) starring Renee Zellweger who won a Best Actress Oscar, when it ‘stood in’ for the London Hippodrome/Talk of the Town where Judy Garland appeared in Winter of 1968.

The Empire Theatre is a Grade II* Listed building.