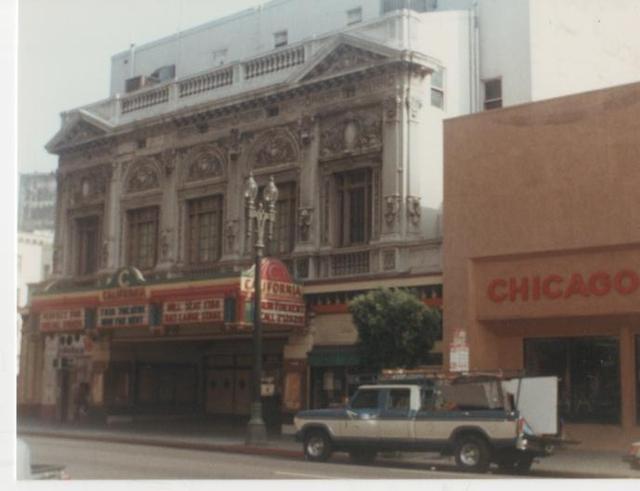 Miller’s California Theatre opened on December 24, 1918 with Douglas Fairbanks in “Arizona”. It was equipped with Robert Morton 3 manual organ which was opened by organist Ray Hastings. It was initially a movies & vaudeville house. The balcony was reached by a ramp rather than conventional stairs. By November 1919, it had been leased by Samuel Goldwyn to showcase his films and he hired S.L. Rothaphel of New York, later to become famous as ‘Roxy’, to manage the theatre. He made many ‘improvements’ to both the interior and exterior of the theatre. In 1920 a $50,000 Wurlitzer organ was installed.

By 1950 the California Theatre had become a Spanish language movie theatre and ended its cinematic days as an adult theatre, part of the Pussycat Theatres chain. It closed as a Pussycat Theatre in January 1988. It had one last gasp of respectability when on June 24, 1990 two Harold Lloyd silent films “Hot Water” & “For Heaven’s Sake” were screened, accompanied by Gaylord Carter on the Wurlitzer organ.

It was demolished soon after.

I just came across a opening and deducation souvenir program for the California Theatre at Main and Eighth St. It consists of approximately 70 pages, is string-bound. My grandmother had it in her papers. She was a life-long entertainer/musician who participated in a number of stage shows and at least one movie in her later years (Blackbeards Ghost). The interior of the program is in very fine shape. The outer cover id a bit frayed at the edges, but very presentable.

Here is an early photo of the California Theatre featured on the cover of the May, 1919, issue of the Los Angeles-based investment magazine American Globe.

Wondering if anyone has a photo of the murals that were on either side of the spiral staircases?

I have a California/Miller’s Theater combo program at the Silent Film Still Archive. The Moving Picture World of May 11, 1918, had this item about the California Theatre, though the project missed the theater’s projected opening date by about over months:

“The new Miller theater, now being erected at Eighth and Main streets for Fred Miller and associates, is being rushed to completion in record time. Work was started on the theater on February 11. All the walls are in up to the mezzanine floor and the great concrete slab covering the entire mezzanine floor has been poured; also the two grand stairways on either side of the main entrance, which lead up a gentle incline known as a ‘ramp’ and the main ramp leading to the balcony are a mass of solid concrete reinforced by steel bars.

“To get ready for this operation and to bring the work up to its present condition, it has taken over 250,000 feet of lumber, 70 tons of steel bars, 800 tons of rock, 450 yards of sand, 4,000 sacks of cement, 100 kegs of nails, three and a half tons of wire and about fifty tons of miscellaneous materials. The new theater will be ready September 15.”Having never been inside the California I was unaware that it had ramps. Architect A. B. Rosenthal must have been aware of the theaters designed by architect Henderson Ryan, who first used ramps for balcony access in Seattle’s Liberty Theatre in 1912, and patented a ramp system for theaters in 1916.

I’ve managed to dig up bit (a very little bit) more about Rosenthal. The 1926 Los Angeles city directory lists him as Rosenthal, Alex B., archt. 815 S. Hill rm 709, with his residence at 2401 6th. 815 S. Hill was the Hillstreet Building, the office block which was also occupied by the Junior Orpheum Circuit’s Hillstreet Theatre. Rosenthal’s office had been moved into the building in 1922, the year it was completed.

Alex B. Rosenthal was practicing architecture in Chicago at least as early as 1896 and at least as late as 1904. He opened an office in the Lankershim Building in Los Angeles in 1915.

The last event at the California Theatre must have been the program of two silent movies with accompaniment from the California’s Wurlitzer organ on June 24, 1990, noted in this item from The Los Angeles Times of May 8 that year:

“That’s all, folks! Los Angeles theater organist Gaylord Carter will make his farewell appearance on the California Theatre’s mighty Wurlitzer on Sunday at 2 p.m. With the imminent demolition of the historic building, the local Theatre Organ Society has slated only three more programs, including the grand finale on June 24. Carter, who is remembered by old-timers for providing the opening and closing theme music to the 1930’s ‘Amos 'n’ Andy' radio programs, will accompany two Harold Lloyd films, ‘Hot Water’ (1924) and ‘For Heaven’s Sake’ (1926).”

Until coming across this item I’d been unaware that the California’s organ was still in the theater and operational as late as 1990. I’ve been unable to discover any details about the organ, or what became of it when the theater was demolished later that year.