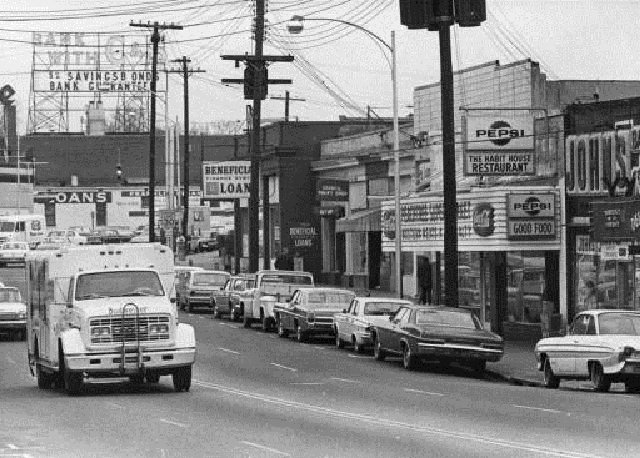 The 10th Street Theatre opened on September 27, 1926. The exterior was in a faux Spanish style with red stucco and a tile edged roof.

It closed around 1956/57 and few years later was converted into a Chinese restaurant called ‘House of Eng’ which lasted through the 1960’s. The building was demolished in the late 1970’s or early 1980’s.

The Tenth Street Theatre opened on September 27, 1926 with the film, “Cohens and Kellys” and was billed as the “finest suburban theatre in the south”. The theatre was constructed and operated under the direction of W.K. Jenkins, Arthur Lucus, and R.H. Wilby, with Alpha Fowler as its director.
Of the several theatres this group operated, The Palace, West End, and the Empire, all of which had a Spanish theme. The Tenth Street was the most elaborate. With its tile roofed tower and canopied balconies (which where lighted at night) on the corner of the building to the Moorish arches that framed the two retail spaces, the theatre was quite an imposing sight for someone headed west on 10th street going toward Peachtree.

The theatre seat about 550, newspapers report that a fine concert pipe organ was installed (however type and size has not been determined). The interior was Moorish in design with two small balconies on either side of the stage. The most notable feature in the lobby was the green and red tile fountain. The tiles were funished by the Eubanks Mantel and Tile Company Atlanta)

The demise of the theatre ultimately came due to its location. As one crossed Peachtree heading west on 1Oth drivers had to make a sharp dog leg to continue on 10th which then became a narrow street running down beside the theatre. If drivers were not careful they could end up in the lobby of the theatre. In the mid fifites it was decided to widened the section of 10th street from Peachtree to Northside drive. THe theatre was demolished, and 1oth street was straighten out and now runs were the theatre once stood.

THe House of Eng. later was in the building that was next to the theatre but now is on the corner of 10th and Peachtree.

To clarify the statement about the House of Eng. What I meant was that when the theatre was torn down, the building that the House of Eng would occupy was now the corner building. The House of Eng building has been since demolished, and the space has been left open to afford a better view of the Margret Mitchell apartment or what she labeled “the Dump”.

On a recent visit to the Atlanta History Center, I found a later photograph of the the 10th Street Theater. The shot was taken what looks like in the late 40’s. The theater exterior had been remodeled somewhat along more modern lines. The Spanish sytle was now gone, so to was the tower on the corner of the building.

From previous post regarding the “Tenth Street Art Theatre”:
The original Tenth Street Theatre was at 990 Peachtree Street, NE. It stood in front of the apartment house where Margaret Mitchell and her husband lived for a number of years, and where she wrote GONE WITH THE WIND. If you visit the restored apartment house that is now a memorial to her, you’ll find a framed picture of the Tenth Street Theatre on display. Margaret Mitchell was a movie buff and this theatre was a real favorite of her’s because of the air conditioning in the summer, as well as its convenience.

The theatre was built circa 1926. The exterior was in a faux Spanish style with red stucco and a tile edged roof. My best guess is that it had about 500 seats. The theater ceased operation around 1956/57 to the best of my recollection. A few years later the space was converted to a chinese restaurant called House of Eng, that occupied the location throughout most of the 1960’s.

With the development of the drug culture in the 1970’s, this neighborhood deteriorated badly. As nearly as I can recall, I believe the theatre was demolished sometime in the 1970’s or possibly the early 1980’s.

My dad used to take me to see westerns at the Tenth Street Theatre back in the 1950’s.

That’s quite a photo, Lost Memory! Or should I refer to you as “Recovered Memory”?! As I recall, when the theatre closed and was converted to The House of Eng, they restored a bit of the original look of the building. By the way, House of Eng was a pretty good Chinese restaurant. They also operated a Polynesian style restaurant downtown called Trader Eng’s (think Trader Vic).

You may be correct about the demolition of the theater. Since I have not lived in Atlanta in many years, my memory may be faulty.

I have just finished an article in the Atlanta Chapter ATOS July 2009 newsletter in which I have a photo of the Tenth Street theater after it opened, The article also has information on the Madison, Empire, West End, and the Buckhead.
The photo posted by Lost Memory is after the removal of all the Spanish decorations.
Just google in Atlanta Chapter ATOS and go to the JUly 2009 newsletter.

This opened on September 27th, 1926. Grand opening ad in the photo section.