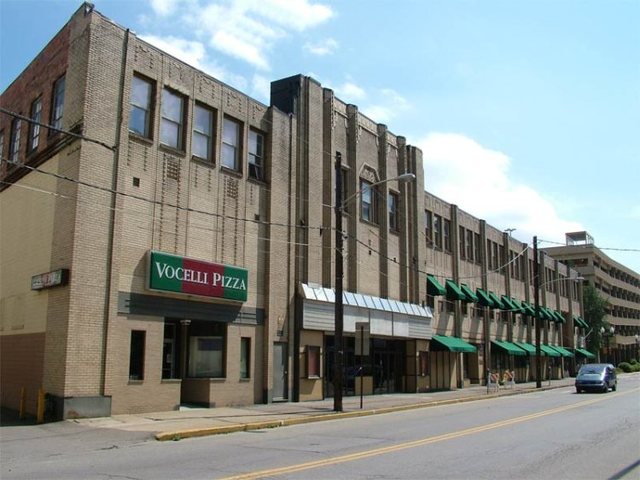 The Drake Theatre is located on Seneca Street on the north side of Oil City, in north western Pennsylvania. The theatre opened as the Colonel Drake Theatre on August 27, 1928, designed by Philadelphia theatre architect William H. Lee. The exterior style is Art Deco. A sketch, likely prepared before construction, of the theatre’s exterior is on page 12 of Volume Two of the book “American Theatres of Today” (1930). The theatre was equipped with a Wurlitzer 3 manual 11 ranks pipe organ which was opened by Scranton based organist Clark Piers. Colonel Edwin L. Drake (1819-1880) popularly credited with being the first to drill for oil in the United States.

The theatre has been through several floods. It had a balcony which was no longer open, even when the theatre was. There were two matching staircases, but one was removed to make room for a snack bar. It closed in July 1986 with Robin Williams in “Club Paradise”, when the theatre at the Cranberry Mall expanded from three screens to five. For a short while in the mid-1990’s, it reopened as a playhouse.

As of 2013, it appears to be for sale for whoever wishes to turn it into a residence. It was demolished in November 2021.

If one compares the 1983 photo against the 2004 photos above, you notice the terra cotta parapet ornamentation and the deco tower capitals above the front entry were removed. This occurred the early 2000’s when the roof was replaced. there was dumpsters full of broken terra cotta scrolls and zig-zag pieces that were simply discarded. The white capitols of the towers reportedly set in some local private garden, but that was 2900 years ago. All of the ornament, except for the glazed white capitols, was the same buff color as the remaining terra cotta on the building. This monochromatic facade contrasts to the colorful terra cotta of the across town Latonia theatre. The Oil City Playhouse briefly reopened the Drake for a year or two in the mid 1990’s as a performance theatre.
I was fortunate to perform on the Drake’s stage in the performance of “Melba, The Toast of Pithole”, a melodrama written about the local oil boomtown and a colorful cast of characters. I played Danny Sweetapple, the hero of the story. I was impressed with the ornamental plater and murals depicting oil, hunting themes each in stylized art deco fashion, which never was too apparent when I watched movies there as a child. All of the lighting including wall sconces throughout and facetted central chendalier were still intact and operational at that time. I am not aware of the state of the interior today, although I am pessimistic. The entire building is vacant now after the departure of a marketing call center which occupied the adjacent office and retail space of the complex. I believe this fantatic historic building is currently for sale.

I hope this theatre is bought and saved! Time for someone to win the lottery.

Does anyone have any info on the “Venango Theatre” located in Oil City? Thanks!

The Oil City newspaper, the Derrick recently published a story about the Derrick Theatre which was an art deco theatre built in the 20s. I have reached out to the journalist who wrote the article. If I received it, I will share it here.

The community tried to find a buyer to turn the art deco building into apartments in 2013 to no avail. There is another theatre in the town called the Latonia though I don’t know its current status. There was also a theatre by the name of the Lyric. Oil City was a thriving town though no more, it seems. And to think the Derrick was closed because a mall theatre opened with 5 screens. Sad.

The community tried to find a buyer to turn the art deco building into apartments in 2013 to no avail. There is another theatre in the town called the Latonia though I don’t know its current status. There was also a theatre by the name of the Lyric. Oil City was a thriving town though no more, it seems. And to think the Derrick was closed because a mall theatre opened with 5 screens. Sad.

And I wonder whatever happened to the Derrick’s Wurlitzer organ? If anyone knows, please elaborate.

This theater is currently being demolished.