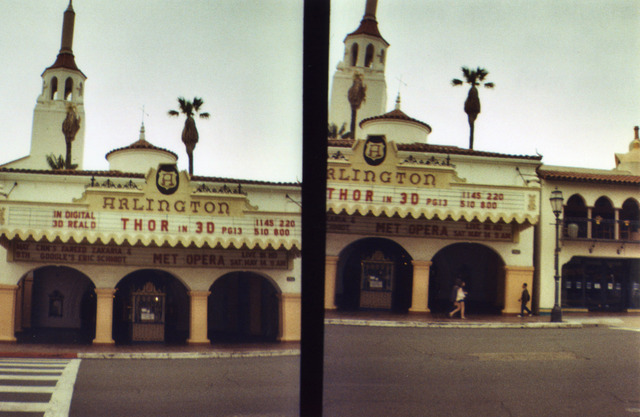 This Mission Revival/Atmospheric styled theatre built for the Fox West Coast Theatres circuit in 1931 has been beautifully restored. It opened on May 22, 1931 with Janet Gaynor in “Daddy Long-Legs”. It had 1,776 in orchestra and loges.

In 1973 the loge seating was replaced by regular seating, increasing the total seating capacity to 1,825. In 1976 additional rows of seating were added to increase the seating capacity to 2,025. The Arlington Theatre and its Atmospheric Spanish Mission Revival style interior is just one part of its majesty. After walking past the free-standing ticket booth, under the marquee and through the Spanish courtyard and fountains, visitors enter the small lobby on their way into movie paradise.

Entering the theatre, the auditorium is flanked on both sides by faux-Spanish Mission Revival style villas while lanterns, windows and staircases adorn both walls. The ceiling is also filled with twinkling stars that give the illusion that the viewer is watching a film in an outside courtyard. It is equipped with a Robert-Morton 4 manual 27 ranks ‘Wonder’ organ which was removed from the Loew’s Jersey Theatre, Jersey City, NJ in 1975.

The Arlington Theatre is a can’t miss experience and a beautifully restored example of the great Fox palaces of the past.

I wonder if the postcard view at top was an architect’s rendition made during the planning stages. The decor shown in your image looks original but is drastically different.

I think the Arlington’s original “gateway” type proscenium was replaced when the wide screen was installed.

When did that happen?

That is a really nice job. Compared to some other renovation projects done in movie palaces during the 50’s this one is very respectful.

This theatre has always been the Arlington from 1931 till now. It was operated by Fox West Coast Theatres and then by Metropolitan Theatres.

I grew up in this theater and those of Santa Barbara Co.Born in Santa Maria It’s theater of the same name was my second home;an old Victorian monstrosity,with plush seats and balcony and even opera style boxes an a huge red gum drop chandelier et al.I would go and sit in it just to take it all in.I went to the Fox A. in about 1955,I was 8, and of course was riveted by it’s interior the film was about a Maze were a mysterious monster lurked,a birth defect,it might have been a musty re-release,they did that[saw at Xmas break,“The Bishop’s Wife at The State Theater,down the street,1963/64].Does anyone here have archive of The Santa Maria Theater,or of it’s poor cousin the Studio?Ne` in Santa Maria July,‘47

johninman: Cinema Treasures page for the Santa Maria Theatre is at this link. We don’t yet have a listing for the Studio Theatre in Santa Maria.

Article about the Wonder Morton Organ at the Arlington.

The Arlington is celebrating it’s 90th anniversary and has reopened.

“Kicking off the day’s events on Saturday, May 22 at 12:30pm will be a free live performance featuring organ music provided by the Santa Barbara Theatre Organ Society with special guest organist Adam Aceto.  Aceto will play on the Arlington’s Great Theatre Pipe Organ, a 1928 Robert-Morton “Wonder Morton” of which only 5 were ever made.”

With the $5 admission ticket the organ performance, a film and free popcorn were included.