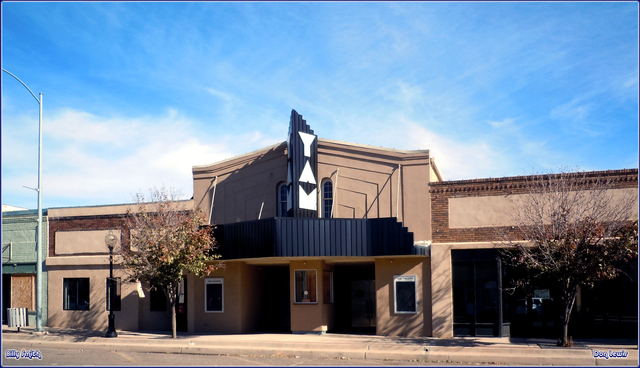 Originally opened in 1926 as the Portola Theatre. In 1929 it was renamed Palace Theatre but soon closed due to the Depression. It reopened in February 1932 as the Portola Theatre once again. In 1936 it was remodeled to the plans of architect Gates Corgan and reopened as the Yam Theatre. The Yam Theatre was still open in 1956, but had closed by 1957. Located on Portales' Main Avenue (formerly Main Street) was given a $1 million renovation between 2006 and 2011, transforming the building into a community arts center.

It shows vary little, but a small photo on this page gives a partial glimpse of the Yam Theatre in its current state.

I was a drama student at ENMU in Portales in 1955-1958. Our school theatre was being remodeled, so we were given an abandoned movie theatre to fix up and use for plays. The Yam was in operation on the town square. Our theatre was on a side street. It was across from Bingham’s Photo and Record Shop. We produced “The Lady’s Not For Burning” and “Family Portrait” and “Right You are If You think You Are” there. Does anyone know anything about this theatre?

About halfway down THIS page is a current view of the auditorium of the Yam Theater.

At the 1:10 spot of this video is the current exterior of the Yam Theater. Pops up in new window.

The Portales Mainstreet Program provides this web page about the Yam Theatre. It opened in 1926 as the Portola Theatre. In 1929 it was renamed the Palace Theatre, but was soon closed due to the depression. In February, 1932 the house was reopened by the Griffith Amusement Company and the original name Portola Theatre was restored.

In 1936, Griffith had the house extensively remodeled and extended rear of the building by 20 feet to accommodate more seats. It was at this time that the house was renamed the Yam Theatre. The architect for the project was Gates Corgan, who had been designing the Griffith chain’s theater projects for at least a decade.