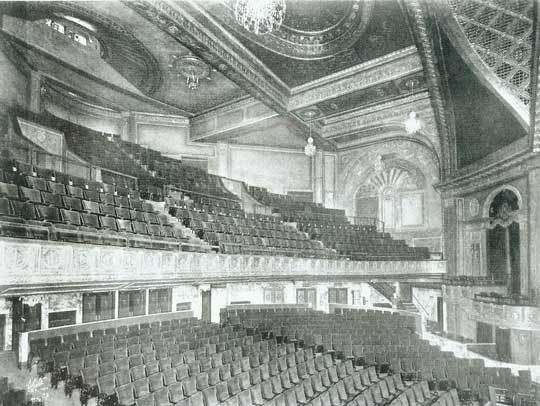 The Ambassador Theatre was built for the Shubert Brother’s as a playhouse, which opened on February 11, 1921 with an operetta “The Rose Girl” which played for 99 performances. It was designed by architect Herbert J. Krapp. The second production to be staged was “Blossom Time” which played for 516 performances, a record which the theatre held for almost 50-years. (It was considered to be not a successful theatre). The Shubert Brothers sold the theatre in 1935. A production of “The Straw Hat Revue” which opened on September 29, 1939 was notable for its cast of newcomers which included Imogene Coca, Alfred Drake and Danny Kaye, with Jerome Robbins appearing as a dancer. It played for 75 performances. The Ambassador Theatre was an intermittent movie theatre from 1923 to 1940 and a full time cinema from 1945-1950.

It was known as the Cine Roma (a name moved from the Broadway Theatre on 52nd Street) during 1940-1941. The Ambassador Theater also served at times as a radio and television studio before returning to the Shubert organization in 1956 and to legitimate theatrical use. The biggest hit at the Ambassador Theatre was the comedy “You Know I Can’t Hear You When the Water’s Running” starring Eileen Heckart & Martin Balsam which opened on March 13, 1967 and ran for 755 performances.

In 1985 the New York City Landmarks Preservation Commission Landmarked the interior of the theatre, but refused to designate the exterior. This was corrected in 1987 when both interior and exterior were given Landmark status.

The musical “Chicago” transferred from the Richard Rogers Theatre in 2003 and is still playing in 2020.

The movie in question is Lilian Gish’s THE WHITE SISTER, not THE WHITE LADY and it played at the Ambassador for over six months. The introduction I am credited for has been somewhat altered with new information since I first submitted material for this theatre over a year ago.

Cine Roma was a moving cinema company that went from venue to venue booking their product and changing the venue’s name. The Colony/ Broadway (53rd) and the Ambassador were two of them.

I originally submitted the Ambassador about a year before it was actually posted. I suspect someone at CT felt it did not qualify due to its more significant legit history and wanted to review it further.

Either that or I sent them on a tail-spin looking up THE WHITE LADY and YIDL MITN FIDL.

It’s interesting that this Broadway theater once played movies.

Did Godspell play here in 1977? Was there a prostitution problem around the theater and the Ramada or was it decent?

they fixed up the 8th Ave area around the Ambassador really nice. just curious, say like 30 years ago was the corner of 49th and 8th a bad corner?

morally. heard the St Malachy Church had problems due to the area

I’ve just added a much brighter and clearer image of a photo already uploaded, showing the American premiere of Roberto Rosselini’s classic 1947 film “Germany Year Zero”, held at the Ambassador on Monday, September 19th, 1949. A very popular film at the time, going by the huge crowd outside waiting to get in.

Promo flyer for The Straw Hat Revue", the 1939 show where Danny Kaye would meet his wife Sylvia Fine.