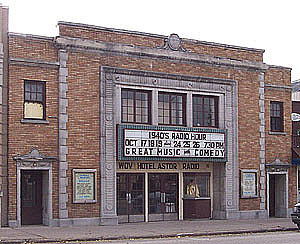 Small downtown theater built in 1921. It was taken over by the Stoughton Village Players in 1999 for live performances.

Fund raising is currently going on to restore the facade to its original appearance.

There is a photo on this site:
http://tinyurl.com/52ypww

The organ in this house was a 2/6 Seeberg/Smith with a roll player that went to Milwaukee in the mid-‘70s. Don’t know what finally became of it.

The BADGER’s pipe organ was still there in 1979. The theatre was immaculate and the elderly owners were very gracious in allowing me to look around after the evening’s program.

The organ belonged to a gent in Milwaukee by 1978 or 79, as we worked on it there trying to get it going again. It had been water damaged in the theatre. He had removed it from the Badger very recently……

Dear folks, glad to see this theatre is still standing and open and in use! It’s amazing to learn that the organ was still there as of the late 1970s.

clarkw if you could remember the name of the fellow in Milwaukee who had the Seeburg-Smith organ from this theatre, I’d be greatly appreciative! You don’t have to post it here on this public page, you can send me a PM.

Is the roll player still with the organ? Does the owner have any rolls with it, and/or did they make a diagram of the original tubing arrangement on the roll player?

I have the book “Treasures of Mechanical Music” by Mr. Arthur Reblitz and Mr. Q. David Bowers, and the Seeburg-Smith BH player pipe organ roll scale is listed there with a lot of unknowns, since apparently the authors were not able to find/access an intact example of this roll player by press time (1981), so the scale listed has the number of holes with a lot of “unknowns” for the functions and playing notes. The scale was apparently made via examining a single known Seeburg-Smith BH organ roll, and making educated guesses about the functions of each hole.

This info wanted is for the Smith theatre organ history webpage I’m putting together, and I won’t post any private owner’s names or pictures on the website without their express permission.

For the other CinemaTreasures folks, here is the info on this organ from “The Encyclopedia of the American Theatre Organ” by David Junchen, pg. 631:

FYI the only other Smith roll player listed in Mr. Junchen’s “Encyclopedia” was on the 2/7 organ installed in the Golden State / Gateway Theatre in Oakland, CA in 1926. I have not yet been able to find out anything about this latter organ, so know nothing about the roll player for it, such as whether it used the same scale as the Seeburg-Smith player.

There MUST have been other Seeburg-Smith roll players besides the one installed on the Badger Theatre organ, but info on Smith organs was very incomplete at the time of publication of that book (1989) and is still rather incomplete today.

ANOTHER NAME WAS CINEMA CAFE