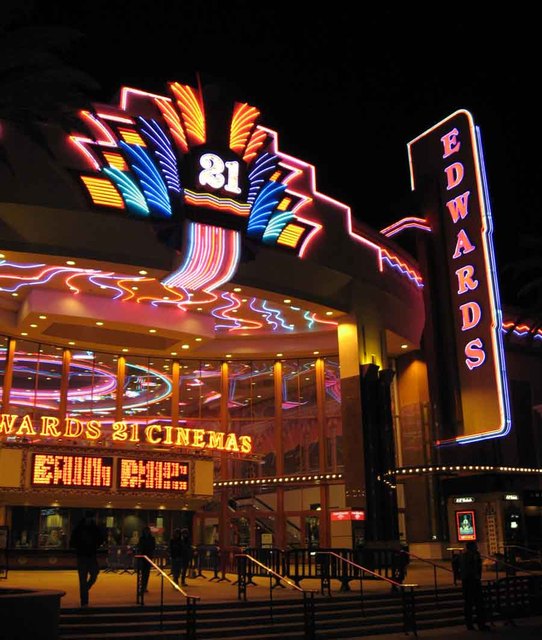 This Edwards Theatre’s 21 & IMAX opened November 22, 1995 and was one of the first megaplexes, also billed as the largest motion picture complex in the nation at the time. Soon to follow was the Edwards Ontario Palace 22 and IMAX. The Edwards Irvine Spectrum is located within a large out door shopping complex called the Irvine Spectrum.

This theatre was the first to use the themed auditorium concept from what I have learned. The lobby is 15,000 square feet. The theatre itself is adorned in marble from Italy, Greece, South Africa and Tunisia, with vibrant murals and majestic staircases, Art Deco-inspired, polished stainless steel and brass ornamentation, and mosaic floors. The lobby has a 100 foot long snack bar and also has seven additional concession areas within the theatre.

This Edwards has four themed theatres. They are “The Egyptian”, “The Chinese”, “The Palace”, and “The Hollywood”. These each seat 550 people. The other 16 screens seat between 200 and 250 people. I don’t remember the auditorium numbers for the themed screens. The themed auditoriums are only done so on the outside of the auditorium. The inside looks like any other theatre from it’s time.

The IMAX is a massive 90' wide by 65' high (roughly six and a half stories tall), and seats 580. The Irvine Spectrum site claims the IMAX screen is eight stories tall. I’ve seen it and I don’t believe it’s that tall. The Edwards chain is now under the Regal Entertainment Group and has retained it’s brand name. By 2021 it was operating with 20-screens.

Caught The Hateful Eight here in 70mm over the weekend, only theater in OC showing the road show version. They had it in a tiny little theater, looked like any other standard presentation. The only reason I knew it was film and not digital was the sound of the projector. Glad I saw it, but 70mm road shows are not made for little multiplex screens. Really felt bad when I stepped out at intermission and saw that the large Hollywood screen across the hall was sitting empty (no doubt in between Star Wars screenings).

Can anyone tell me the screens numbers for the Palace, Hollywood, Egyptian and Chinese theaters?

Regal carried out a remodeling of this theater beginning in 2015. Reseating has undoubtedly reduced the overall capacity, but I haven’t been able to discover the current number. The plans for the remodeling were by BB Architects, and the firm’s web site features this slide show with eight photos displaying some of the results.

Which auditorium is the ScreenX theatre?

Irvine Spectrum was quite a revelation when it opened 25 years ago last fall. Back then the center was just a handful of shops & restaurants (B&N, Diedrich Coffee, Champs) and the massive 21-screen theater.

It became the go-to destination for catching dinner & a flick with friends, even when I was living in Costa Mesa & Fullerton.

The Hollywood & Palace were the massive stadium-style theaters, while the Chinese & Egyptian were big, but more intimate. You always hoped your movie was playing in one of the four. Luckily they were noted in the newspaper ads.

Can remember seeing 12 Monkeys, Executive Decision, Twister, Mission Impossible, The Rock, Boogie Nights & Magnolia there, to name a few. Even remember catching Meet Joe Black so I could get my first glimpse of the Star Wars Episode 1 trailer.

Caught a few in the early 2000s, but as the center grew it kind of lost its allure. Last thing I saw there was The Hateful Eight in 2015.

Now that I know the ScreenX auditorium is 20, what’s the front-side ratio there? (If a picture of a lonely screening from 2018 is anything to go by, I believe the main screen is 1.85:1.)

In regard to inflightmagazines comment from 2021… I think all Edwards locations skipped theater 13, which means if they opened as a “21” it was always just 20. I could be wrong.

Scott, I don’t think this Edwards skipped 13, and as far as I can tell there’s still 21 screens, including the IMAX.