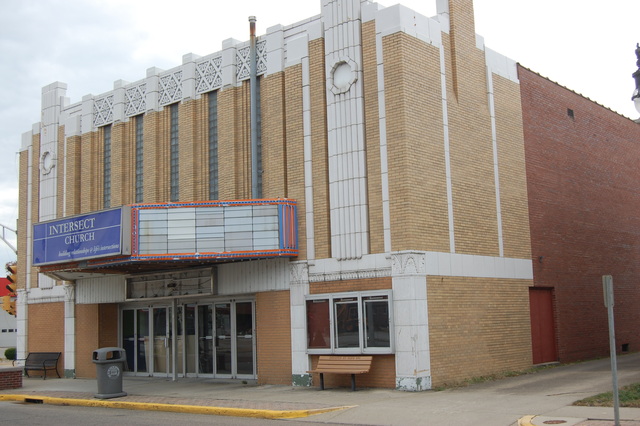 The New Moon Theatre in Vincennes, Indiana was opened December 14, 1939 with seating for almost 500 people. By 1950 it had been re-named Moon Theater and was operated by Alliance Theater Corp. Click the link below for a photo of the New Moon Theater.

On October 7, 1983 it was renamed Showplace 3 by Kerasotes, they closed it on 30th May 2003 when they opened their new Showplace 8 complex. It became a church and by 2020 was a pizza restaurant.

In 1963, the New Moon was operated by Alliance Amusements, a Chicago chain. Alliance also ran the Pantheon and Allison Drive-In in Vincennes.

When kerasotes took over this theatre they devided it into three theatre. Two downstairs and one in the balcony. This is now used for a church with the sanctuary in the balcony and the downstairs is used for performance space and a children’s church.

The book Vincennes, 1930-1960, by Richard Day, Garry Hall, and William Hopper, says that the New Moon Theatre opened on December 14, 1939 (Google Books preview.) The book also indicates that the original Moon Theatre, which opened as a vaudeville house called the Red Mill in 1908, continued to operate as the Moon Theatre at least into 1941.

Numerous articles from local sources in 2015 and 2016 indicate that plans are afoot to renovate the New Moon Theatre building, though probably not for theatrical use. A new roof has stabilized the building, which had suffered water damage, and mold removal has been undertaken.

It is my understanding, that at one time my Grandfather and Uncle owned and operated this theater. I am not sure of the years, or even if it is true. Can anyone answer that for me, the last name is O'Keefe.

Dokeefe: I’ve been unable to find in any of the sources available to me any mentions of anyone named O'Keefe in connection with this theater. That doesn’t mean that there was no connection, of course. Many theaters in small cities and towns were mentioned in such trade journals as Film Daily or Boxoffice infrequently, and some never.

A local newspaper archive would be the best place to search, but the only such archives from Vincennes that I can find online are from the 19th century- pretty much useless when searching for information about movie theaters. The Knox County Library probably has some archives, but it’s unlikely that they have been digitized, and non-digitized newspaper archives are tedious to search even if you have a good idea of which period you are looking through. Still, a visit to the library is probably your best bet, until somebody puts some newspaper archives from Vincennes online.

But I will keep an eye out for the information. New sources show up on the Internet from time to time, and I do try to keep up with them. And, if your relatives were indeed operators of this house, there’s always the chance that simply having your request on this page will attract some local Googler who knows about them. I’ve seen such things happen.

Records of the American Terra Cotta and Ceramic Co. say that the Moon Theatre in Vincennes was designed by the architectural firm of Warwig [sic] and Hagel. The correct name is Warweg & Hagel (architect Earl O. Warweg and engineer John Hagel) who designed the Carlton Theatre at Evansville and at least two other Indiana houses.

Looks like the name history in the listing is wrong. The photos clearly show the marquee said ‘New Moon’. Maybe ‘Moon’ was just a mistake in the first few listings? Anyhow, this should be listed under ‘New Moon’, not the shamefully lame ‘Showplace 3’, which was only toward the very end. 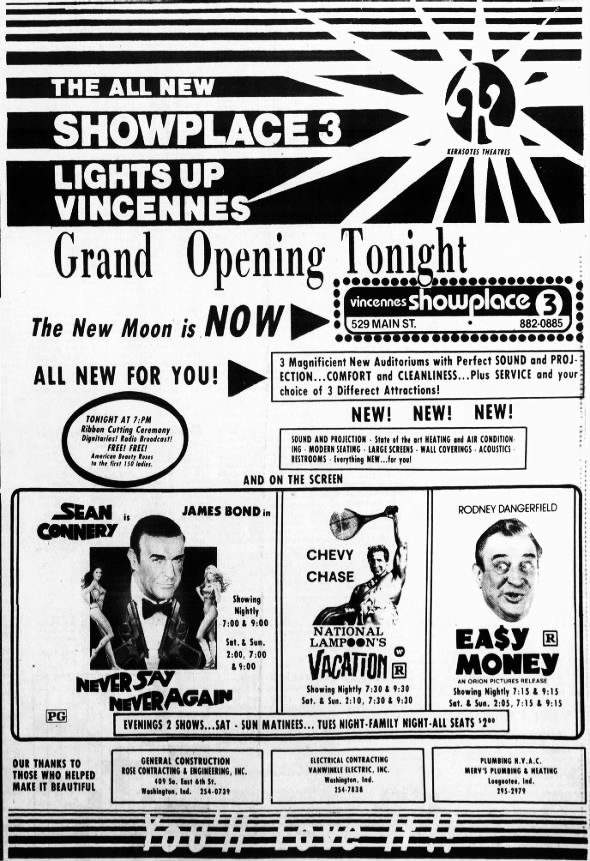 Now the home of Old Chicago pizza. Apt use for the marquee.