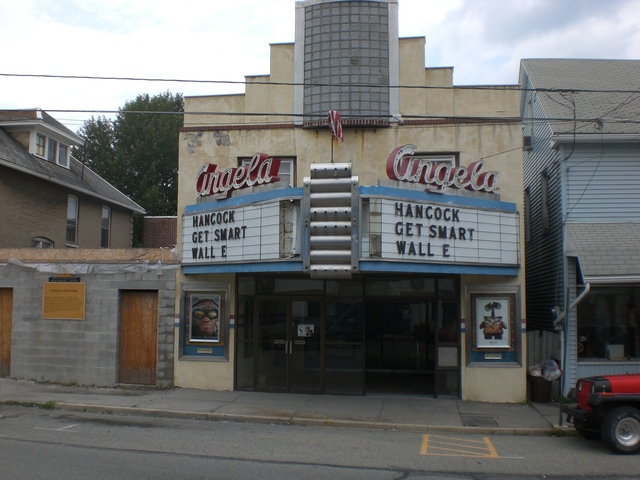 Built on the site of the Ritz Theatre. The Angela Theatre opened for the first time on October 11, 1949 with Abbott & Costello in “Africa Screams”. From what I understand, it was named for the daughter of the person who built the theatre. It seated 711 people on its one floor and was roughly Art Deco in design. It had a large lobby and an unusual prism glass proscenium arch with colored lights located behind it that gave an interesting effect. It also had a large V-shaped marquee containing large letters spelling out the theatre’s name.

It closed around 1970 and was basically abandoned until around 1997 when an enterprising person purchased the building and began the tremendous job of restoration. The theatre was essentially a shell that had to be fully rebuilt. The entire family was involved with this work which took a number of years. The auditorium has now been split into three screens, the first reopened in 1999. The main auditorium now has 240 seats and is an incredible site to see. The proscenium arch has been restored and the auditorium now offers stadium seating. The marquee has also been fully restored. The two smaller screens each seat 101.

This theatre is a true asset to the small town and shows an interesting way small town theatres can be restored and reused.

I lived in the area in the 70s after the theatre closed and always wondered about its history. Thanks, Bobs, for creating this page. I’ve seen a picture of the Ritz Theatre on Second Street, destroyed by fire in the ‘40s.

I recently went to see a movie at the Angela. The owners have done an incredible job of renovating/restoring this theater. I was able to speak to them after the show ended. They happily shared stories and photos of the theater before and during renovations. It is a great example of how a single screen theater can be converted to a multiplex while retaining its character and charm. Many of the original features remain, including the stage, sloped floors,glass entrance doors,glass block lighting and chandeliers. The owners should be commended for their foresight and perseverance in this project.

An update on the history:
The Angela Theater was built on the site of an earlier theater which was destroyed by a Christmas night fire in 1948. Mr. Peter Magazzu Sr.,who owned a chain of movie theaters in northeast Pennsylvania, built the new theater naming it after his mother and daughter who shared the same name.
The construction firm was Boyd Kline Contracting of Bloomsburg,PA.
The theater contained 711 seats; a number Mr. Magazzu considered to be lucky. Perhaps he was right since this is the only one of his theaters still running.
The Angela opened on October 11,1949 (Mr. Magazzu’s birthday) with a showing of the movie “Africa Screams” starring Bud Abbott and Lou Costello.

A correction to my previous post:
The contractor for The Angela was Salvadore DeFazio. Boyd Kline was the contractor for another of Mr. Magazzu’s theaters located in Montoursville, PA called “The Laura”.

I was only five years old at the time, but I recall throwing some coins into the cement as they were pouring the foundation of this beautiful theatre. Building the Angela was the height of my Dad’s 50+ years in the theatre business which began in Philadelphia with the job of walking up and down the aisles with water for any thirsty patrons. When the Angela was completed, he was operating about 15 theatres all of which were named ‘Ritz’ except the three he built himself: Andrea, Catawissa, PA (named for his Dad), Laura, Montoursvilla, PA (named for his wife), Angela, Coaldale, PA (named for his Mom and daughter).

Coaldale folks should feel a bit lucky since the Angela was to be built in Stone Harbor, NJ; however, the fire that destroyed the Ritz in Coaldale changed his plan. (By the way, the Ritz was on Second Street, not on the current site of the Angela.)

A lot of my youth was spent in the Angela, selling candy, taking tickets, sweeping floors and sidewalks, running the projectors, and managing. There are some wonderful memories in this fine theatre for me and the town as well. I wish Mike Danchak all the luck in the world in his revival of this fine showplace. Ron Magazzu

I worked at the Angela when I was 14 yrs old as ticket taker & later projectionist. When it came available at a tax sale I just had to have it. A lot of people thought I was out of my mind including my family. They didn’t realize how much experience I accumulated over the years working for big chains like Sameric Theatres, Budco & Redstone Theatres as manager projectionist & technician. I’ve developed all the skills electrical, plumbing,carpentry & technical that I needed to put this fine theatre back together and in Aug. of 1998 it reopened as the Angela Triplex Theatre.