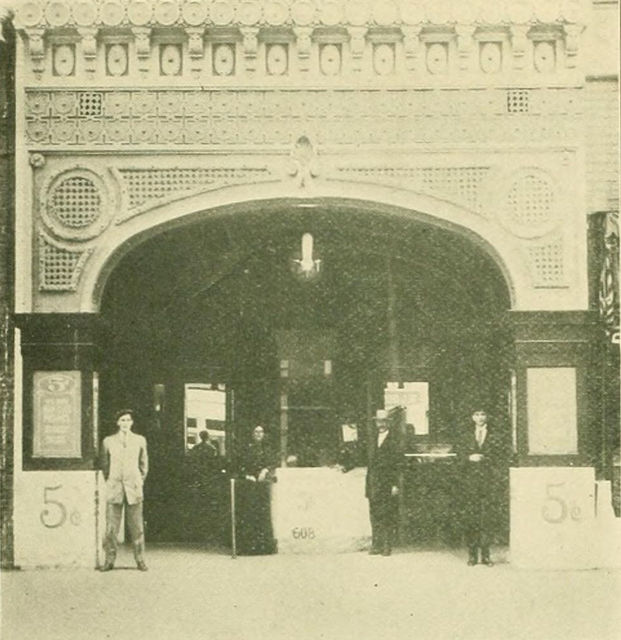 This vanished theatre down S. Hill Street from Pershing Square in downtown Los Angeles was opened by February 1912 as Butler’s Theatre, operated by A.L. Butler. In the early-1920’s it was renamed Shamrock Theatre. It was operated by the West Coast Theatre Circuit in December 1924, when it was remodeled and the name was changed to Bandbox Theatre. It was closed in 1926 and demolished to build the William Fox Building.

Speaking of theatre fires, I’m wondering if the Times has anything to say about the fires which I’ve heard occurred in several Edwards theatres in the 1940’s? I know that the Arcadia Theatre was destroyed by a fire in 1942, and my neighborhood theatre, the Garvey, was gutted by a fire apparently set by an arsonist in about 1949 or 1950. When the Garvey was being restored, I remember my mom saying that “somebody is trying to burn down all the Edwards theatres”, but she has no memory of these events now. Most of Mr. Edwards' theatres were in the San Gabriel Valley then, but I believe he still had three or four in the city of Los Angeles, so the Times probably would have mentioned any fires at any of those, even if they didn’t run articles on fires in the suburban theatres.

Joe, I’ll look into those theaters and if I find anything I’ll put comments on their pages.

I’m wondering if perhaps the ornate, arched entrance on the far end of the building at the lower right in this c1913 photo might be the door of the Shamrock Theatre?

Kind of hard to make out in the picture, but I think it says “Burlesk” above the arch in that picture Joe mentions above. Anyone else think so?

This picture recently added to the L.A. Library’s on-line photo collection shows Hill Street south of 6th in what is probably the late 1920s. (The library’s information page about the photo misidentifies it as Spring Street ca1920.) At the very left can be seen part of the theatre’s marquee. Another, smaller marquee farther along the same building probably marks the entrance to the dance hall on the second floor.

To very belatedly answer ScottS’s question from May 5, 2007, I think the name above the entrance is “Butler’s.” 608 S. Hill Street is listed as the location of Butler’s Theatre in the 1915 L.A. City Directory.

This earlier photo from the USC Archive (mis-dated as ca.1920, but the tall building on the southeast corner of 6th and Hill, built in 1913, isn’t there yet) shows a different style of facade, without the round arch. It looks vaguely Moorish. This might have been the original theater entrance, or a pre-theater storefront.

The chronology as determined so far would be this:

So that round building across the street on 6th and Hill would be the predecessor to the Paramount/Metropolitan, right?

Yes, the round-cornered building was the First Methodist Episcopal Church, built ca.1890 and designed by architect John Austin. The congregation moved to a new church at 8th and Hope in 1920.

Listings stopped in 1926 for this theatre.