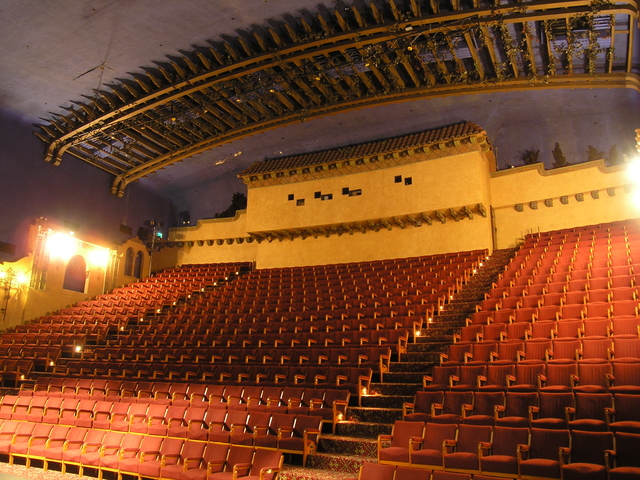 This was the largest theatre in the Southern Hemisphere when it opened on 23rd February 1929 with Clara Bow in “The Fleet’s In” and Buster Keaton in “The Cameraman”. The interior resembles a Florentine garden and the impressive exterior is in Saracenic mode. The ceiling of the foyer and the auditorium are both painted dark blue and a features inside were the stars and clouds on the ceiling. The left side wall represented the Doge’s Palace in Venice and the right side wall the temple of the Venus de Capua in Naples. The Venetian style proscenium opening completed the decorations which were adorned with statues of naked gods and goddesses, imitation greenery and plaster doves.

The State Theatre was the flagship theatre of Greater Union Cinemas in Melbourne and it was equipped with a WurliTzer 4 manual, 21 rank (with twin consoles) organ that was opened by Frank Lanterman and Renee Lees.

The State Theatre was closed as a single screen on 8th March 1962 with Glen Corbett in “Homicidal” and Chubby Checker in “Twist Around the Clock”. It was converted into a twin cinema by walling off the balcony. Plans for this work were drawn up by architects Gordon Murphy & Reginald Appleford, of architectural firm Cowper Murphy & Appleford.

There are still some stars in the ceiling of the downstairs auditorium which reopened on 21st April 1962 with Nancy Kwan in “Flower Drum Song”, a new name Forum Cinema and a reduced seating capacity of 944. This was an expensive conversion, as each side-wall was ‘brought in’ by several feet to create extra office space and retail units behind. Instead of going for the cheaper version of installing blank walls, the original plasterwork was taken apart and reinstalled. The WurliTzer organ was sold to a member of the Theatre Organ Society, and later was sold to the suburban Moorabin City Council for installation in their Town Hall, where it is played for occasional concerts.

The screen in the former balcony opened on 20th December 1963 with Audrey Hepburn in “Charade”, a new name Rapallo Cinema and a seating capacity of 627. The Forum Cinema screen was equipped for 70mm presentations and both screens had Dolby sound installed. From July 1981, the screens were re-named Forum 1 & 2.

The Forum’s closed as cinemas when the building was sold to Revival Centres Australia from 26th September 1986 and for the next nine years the building operated as a church.

Staged Developments bought the theatre in 1995 and it is now part of the Marriner Theatres group. It now hosts concerts and functions downstairs with a capacity of 1,500, with most of the seating removed and 800 in a more intimate setting when comedy shows are booked. Occasional movies (sometimes a venue for the Melbourne Film Festival) and special events take place in the former balcony upstairs which now has a seating capacity of 540.

The State (the former name of the theatre) opened in February 1929. The opening films were Buster Keaton in “The Cameraman” and Clara Bow in “The Fleet’s In”. The daytime organist was Arnold Coleman with Frank Lanterman (from America) in the evening. I can’t remember the orchestra conductor – but I know the first one there was American.
The Wurltizer organ had two consoles, the one on the right was a ‘slave’ console – the registration came from the organist at the ‘master’ console. Apart from a few playings in 1929/30 the slave console was not used until some recordings were made with Aubrey Whelan and Laurie Wilson in the mid-fifties.
The auditorium was atmospheric and the ‘sun set’ behind the proscenium prior to the performance commencing. These effects as well as clouds in a night sky were supplied from a Brenograph projector. The “stars” were little lights in the ceiling.
There was apparently some consternation on opening night when a woman put up her umbrella thinking it was going to rain. This confusion was added to by live doves flying around.
There was some talk that Marriner theatres wanted to purchase the Russell Theatre behind the State and demolish it to allow expanding the State’s stage and fly-tower. He was also supposed to want to de-twin it and rename it The State. However I don’t know whether there is any substance to these rumours. I do know that they were not allowed to re-name it ‘'The State’ as one of the theatres in the Arts Centre now has this title.

Clearly, the present owner is committed to allowing this beautiful building to fall into disrepair to the extent of demolition. Sadly, only the facade is heritage listed, giving free reign to build another skyscraper behind the original frontage. Tragically, the same developer also owns the beautiful Comedy Theatre in Exhibition Street, and would appear to be commited to the same fate.

A set of photographs taken by Cinema Theatre Association member Kevin Gooding in February 2006, during a visit I organised to Australia for members of the CTA (UK). Photographed with the kind permission of Marriner Theatres:

Kenroe thanks for all the great pictures.

Looking at these photo’s took me back to when I was a schoolboy and missed school in order to sit all day at the then State Theatre viewing ‘Phantom of the Opera'starring Claude Raines and Susanna Foster.Oh such golden days when theatres were really theatres.Later I went on to become a Page Boy at the Capitol Theatre and then a Film Projectionist at the Australia Cinema.I now run my own film production house. We have made a documentary on 'The Palaces of Dreams’ which includes the Capitol,Regent and State Theatres and can bepurchased by contacting thomas.di@bigpond..com

Delightfully renovated in the 2010’s.

That lobby looks a treat.

What a curtain!! Is the curtain still there?

The original fire curtain is most certainly still there.