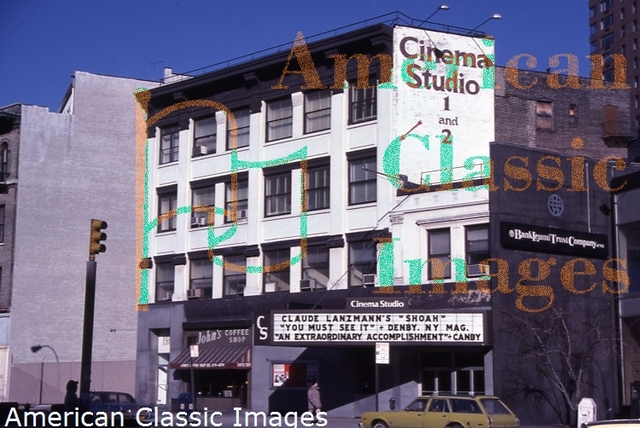 Located on Broadway near Lincoln Center, the Arcade Theatre was opened in 1919. It was badly damaged by a fire in the late-1940’s. By 1950 it had been renamed Studio Theatre. This former 560-seat single-screen theatre was twinned on December 15, 1978 and continued showing first-run art house attractions until closing on March 29, 1990. It was demolished when the Barnes and Noble Bookstore building was put up. It was once known as Studio 65.

Contributed by Gerald A. DeLuca
Get Movie Tickets & Showtimes

Loved this theatre. Such varied fare, I practically lived here in the mid-70s! Took my little sister to see a revival of “GI Blues” (she loved Elvis). I saw a Bunuel double bill (“Viridiana” and “Discreet Charm of the Bourgeosie”) as well as current films like “The Sailor Who Fell From Grace From the Sea.”

I saw Herzog’s “Nosferatu” here in 1979, but I can’t recall any details about the theatre.

Just to follow up: a couple of years ago the Barnes and Noble was replaced by a Century 21 clothing store. Boy do I miss Cinema Studio!

I liked going to the Cinema Studio since it played many prominent low budget indie American films and top foreign language films. a two part question-

1.i’m guessing that the theater(and the surrounding buildings)were torn down because eventhough the theater was quite popular the land underneath it became worth more than the theater could ever bring in at the box office.

2.as stated by Al A. it opened as the Arcade in 1919. i’m guessing it opened from the get go as a 2nd/3rd run neighborhood theater. so when did it become a 1st run venue? when it became the Cinema Studio?

Cinema Studio in the early 60’s was showing Spanish language pictures, transitioned into second run mostly from United Artists with some Fox and Warners' product went first run in the early 80’s when it was twinned Saw Amarcord here in 1974, Women on the Verge of a Nervous Breakdown, Sex Lies and Videotape and one or two more in the late 80s

A few weeks ago, Barnes and Noble Booksellers was sold to a private equity firm ending its run as a public company and leaving behind its sister education division as the sole company to bear the B and N name to still be public on the market.

I remember this place well as I used to work across the street at the Tower Records on 66th and Broadway in the late ‘80s and would go see movies here after work. I remember Women on the Verge of a Nervous Breakdown playing here forever. I know I went several times, but the only films I can recall seeing here were Sex, Lies and Videotape (at a sold out showing on a late Thursday night) and Mystery Train.

I remember going there when it became a Barnes and Noble right next to Starbucks and what is now AMC. Channel 7 in NYC has its studios around this area.