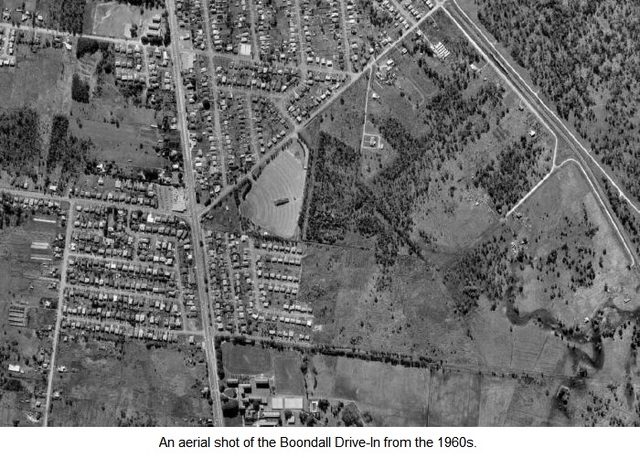 Located in Boondall to the north of Brisbane. The Boondall Drive-In opened on 8th February 1956 and was operated by Boondall Drive-In Pty. Ltd. At the time it featured the largest screen in Australia (94ftx45ft) There were two sessions a night, while the drive-in could accommodate 600 patrons per session. Apart from movies, there were Shetland pony rides for kids. The site was used on Sundays for major Go-Kart meetings and races. There was a snack bar and barbecue where you could pick a chef cooked steak, prepared for you right on the spot.

The drive-in operated for 34 years, closing on 28th February 1990, it was demolished and the site turned a housing estate.

Worthy of special note was the projectionist Rex Piggott. Reg commenced his career in the film industry as a 14 year old in England. After emigrating to Australia he secured a projectionist job at the Boondall Drive-In and was employed in this position for 30 years, right up to when the drive-in closed. Reg was a much respected member of the Society of Cinema Pioneers.