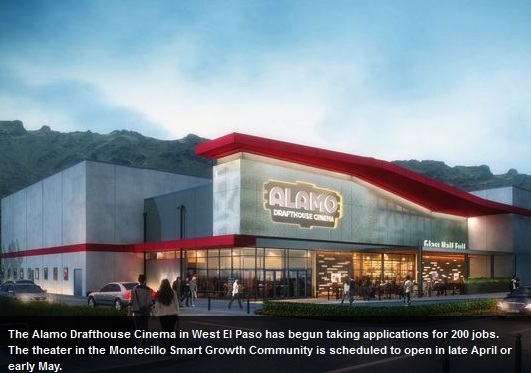 Alamo Drafthouse opened its 24th location and 15th in Texas on May 6, 2016. Pre-opening training days were held on April 25 to May 4 at Montecello Town Center where recent movies could be seen for $2.

Designed by 5G Studio, the eight-screen, 1,050-seat theater has seven auditoriums with 145 seats and one with 35. A 35mm reel-to-reel projector for classic films compliments the latest 4K projectors.

The El Paso Times noted the cinema is operated by Triple Tap Ventures, owner of the Alamo franchise for West Texas and Houston. The theater, with 45 beers on tap, is capable of serving 850 meals an hour, with 24 cooks working on the busy nights.