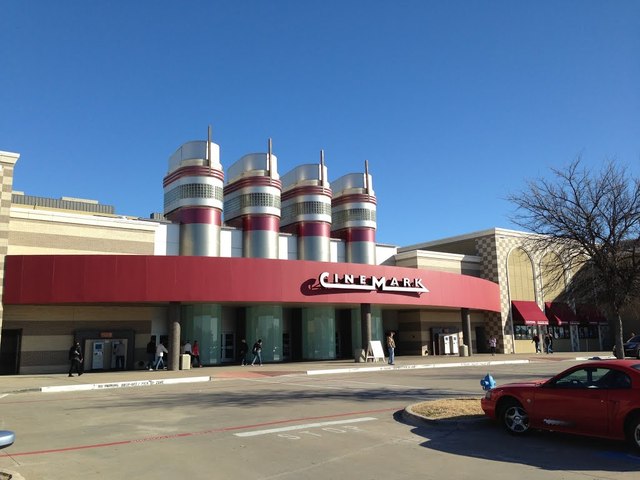 Cinemark’s then flagship location opened on December 20, 1996, as “Tinseltown USA”. It was later rebranded as “Cinemark West Plano” which coincided with a major remodel. Following the remodel, Cinemark West Plano took on many of the features of a Century location, such as a box office located in the theatre lobby and self-serve concessions.

In October of 1995, a Dallas development company announced the 100,000 square foot 5,200 seat 20-screen Cinemark theater project on a 23-acre site just north of the northeast corner of Parker Road and Dallas North Tollway. The larger project extending to the corner would be completed by that development company twenty years later but the Cinemark project, itself, would come on in just over a year once residents’ concerns were addressed by the city council.

The circuit called its Tinseltown USA Plano theater it flagship location as the company would move its headquarters to a neighboring office building. Launching December 20, 1996, the all stadium-seating auditoria ranged in size from 200 to 600 seats each with multichannel sound. An additional Iwerks motion-simulator ride screen had 16 seats opening with “The Red Rock Run” though would be excised once the novelty wore thin. An arcade area —– featured at virtually all Cinemark theaters – fell into controversy when a city rule prohibiting arcades within the tollway corridor was enacted. The arcade would ultimately be replaced by a lounge when the theater was redesigned.

TInseltwon Plano would immediately become the DFW area’s second highest grossing theater behind only the AMC Grand and both AMC and Cinemark would take the momentum to expand in the megaplex era knocking out multiplex-centric General Cinema and counterpunch UA and Loews/Sony in the DFW market. In 1998, Tinseltown USA Plano surpassed the Grand as the highest grossing theater in DFW. And a second Cinemark Plano megaplex, the Legacy, on US-75 delivered stellar results upon its opening in June of 1999.

The Tinseltown USA became an incubator of concepts as the executives could walk over and see the results of concepts. Sneak previews sometimes with stars in attendance took place at the theater. Its moniker would be changed to the Cinemark West Plano and XD and received an incredible makeover with huge self-service concession area, Starbuck’s coffee, a Cinemark Extreme Digital Cinema screen (XD) — the circuit’s first in 2009, a party area next to the XD screen, and would convert from 35mm film to DCP servers projecting digital films and special satellite-fed events including classic film series. In 2014/5, the theater would be joined by eight restaurants built just to the south becoming a desitnation point for foodies and movie fans. Thanks to constant attention and innovative concepts, along with a stellar location, the theater looked to have a vibrant future heading into the 2020s.

This is an AMAZING movie theatre. They have recently added AN ADDITIONAL XD auditorium as well as Luxury Lounger recliner seating. There’s a nice batch of large sized auditoriums in addition to the 2 XD rooms. Currently under construction in their lobby is Cinemark’s Reserve restaurant concept.

I’ll be relocating to the Plano area in 2017 and this joint will be one of my regular moviegoing stomping grounds!

There is now a Virtual Reality attraction called “The Void” housed just to the right of the theatre lobby. It charges separate admission from the theatre.