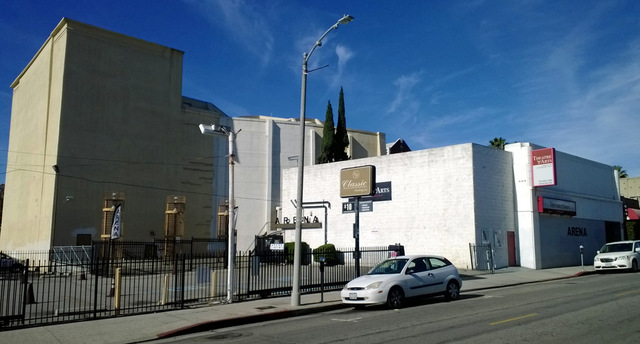 Originally opened on July 19, 1972 by United Artists as the Egyptian 2 & 3. The opening movies were Charlton Heston in “Skyjacked” & Gene Hackman in “The French Connection”. The two screens were created in an already existing former retail unit facing Las Palmas Avenue, alongside and east of the original auditorium of the famous Grauman’s Egyptian Theatre on Hollywood Boulevard. Entrance at that time was via the famous Egyptian Theatre courtyard on Hollywood Boulevard. The Egyptian 2 & 3 closed, together with the historic main auditorium in 1992. The original Egyptian Theatre suffered damage in the 1994 Northridge Earthquake, and it wasn’t until December 4, 1998 that it was reopened by the American Cinematheque after a refurbishment.

In the meantime, the Egyptian 2 & 3 had been converted into live theatre use, and was occupied by several theatre companies. In 2008 the Theatre of Arts College for the Contemporary Actor took over the building as a drama school. In 2010, commercial theatre productions were being staged.

In early-2013 it became the Arena Cinema and by May 2018 had been renamed Arena Cinelounge.

The current incarnation of this venue is a very barebones/DIY sort of operation; the overall experience comes across like a long shuttered theatre being reopened for a night by some enthusiasts. Access to the theatre comes via a public parking lot and rear alleyway. As the theatre originally utilized the main Egyptian’s box office, the, now separate, Arena is forced to make do with a folding table in the entryway for ticket and concession sales. Aside from the auditorium, the interior stands relatively unchanged, looking every bit the worn/modestly maintained 70’s add on. The shallow auditorium is heavily modified from its cinema days and now appointed more for live theater than movies. Seating is listed at 99, but the slightly terraced rows appear to seat closer to 50. Presentation quality is more reminiscent of home movie night than commercial cinema, but befitting the indie programming. From what I’ve seen, the theatre experiences relatively healthy business, given its alternative booking and limited seating capacity.

in the 1970’s I went to a lot of 2nd run theaters in Hollywood. The Egyptian 1 (the real theater) ran double bills like “Waterloo” (in 70 mm) and"Wrath of God" with Robert Mitchum. It was great. 2 and 3 were dumps, but UA booked great dump double bills like “SSSSSSSSSS” and “Boy That Cried Werewolf”. Also saw “Stop Making Sense” at the 2, awful venue.