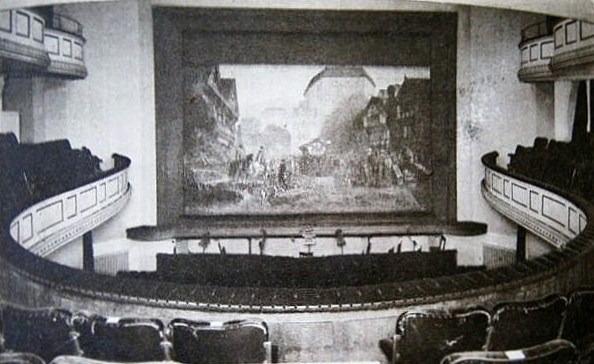 Located in this Warwickshire town, famed as the birthplace of William Shakespeare. The original Shakespeare Memorial Theatre was opened on the anniversary of Shakespeare’s birthday on 23rd April 1879, with a production of “Much Ado About Nothing”. Architect William Unsworth designed a brick building in a Gothic and Tudor style. Seating in the auditorium was provided in orchestra stalls, a horse-shoe shaped circle, gallery and pit levels. In 1881, the building was completed by the addition of a library and picture gallery.

In 1921, during the theatres' closed summer season, a season of films were presented, beginning in April 1921 with Mary Pickford in “Pollyanna”. A projection box was installed on the rear of the stage.

On the afternoon of 6th March 1926, the theatre was destroyed by a gigantic fire, with only the outer walls, and the library and picture gallery surviving. Theatre productions were transferred to the Picture House Cinema.

In January 1927 a competition was held for architects to design a new Shakespeare Memorial Theatre. The chosen winner was Elizabeth Scott, second cousin to Sir Giles Gilbert Scott, architect of Liverpool Anglican Cathedral, and Waterloo Bridge and Battersea Power Station (both in London). She was also the great niece of Sir George Gilbert Scott who had designed St. Pancras Railway Station and the Albert Memorial (both in London). There was much controversy over the design of the planned new 1,000-seat theatre, which was in an Art Deco style. It opened (again on the anniversary of Shakespeare’s birthday) in 1932.

The remains of the original Shakespeare Memorial Theatre were converted into a 400-seat conference hall, again to the plans of Elizabeth Scott. This opened on 15th July 1933. It was used mainly for charity functions and dances, and from 1948 became the reheasal space for the main theatre. In 1985, plans by architect Michael Reardon were passed to transform it into a Jacobean style playhouse, with a thrust stage and a seating capacity of 464. It was opened on 13th November 1986 with a production of “The Two Noble Kinsmen” by William Shakespeare and John Fletcher. It was listed a Grade II building in 1971 and upgraded to Grade II* in 1993.

Meanwhile, despite being designated a Grade II listed building in 1980, and upgraded to Grade II* in 1993, the (new) Shakespeare Memorial Theatre, home to the RSC (Royal Shakespeare Company), was demolished in 2008, to build a new theatre.