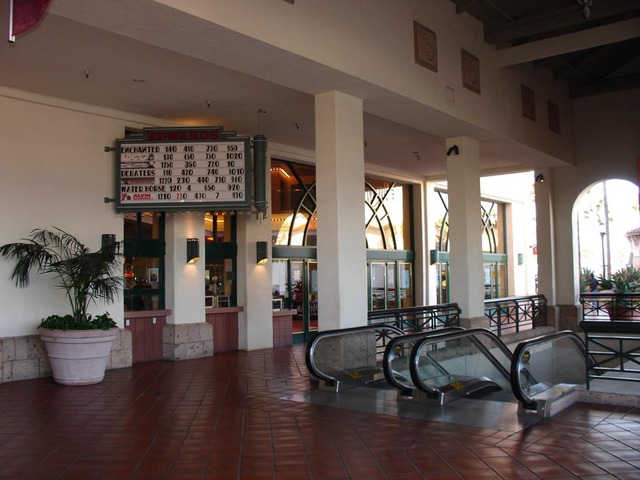 Edwards Island 7 opened in October 6, 1989 at the Fashion Island Center in Newport Beach.

It closed for a major renovation on January 12, 2011, reopening on December 16, 2011 with seating for 670 in its 7 screens. Following renovations it was reopened on April 26, 2018 by Boffo Cinemas as a 7-screen luxury cinema, with the seating capacity reduced to 488 and renamed The Lot Fashion Island.

After the remodel, seating is now 670 total.

This first weekend, Regal is not double-booking any movies at both the Big Newport and the Island. What was the protocol before the remodel?

I ask because, for instance, this means that SHERLOCK HOLMES 2 will not play the Big Newport. This instills in me the fear that more big event films might not get booked in the main BN auditorium.

In recent years, the Island 7 was generally a B-film/move over location, with the occasional indie release. Prior to that, I recall there being some decent bookings,but the Big Newport always took the top releases, due to the larger seating capacity. I don’t recall them ever sharing bookings, but it may have happened with really big movies, from time to time.

I would imagine they will place some special effort in to booking the Island, to help launch the theatre (as they did when it first opened). However, I doubt they will neglect the Big Newport, long term. The Big Newport has more seats in one auditorium than the Island does as a facility. The Island’s higher prices and extras simply can’t replace the Big Newport’s raw capacity and potential for big attendance numbers. They will likely go to double bookings by summer.

It is odd that Big Newport won’t have Sherlock Holmes. It could have easily played at both theaters, one screen for the masses @ Big Newport, another couple for the luxury crowd @ the Island. They’re basically two diffent experiences. I can see the need to launch a new theater but as Sherlock is PG-13, how many kids are going to pay $16.50 for a movie? They’re not exactly the demographic for an upscale, pricey environment. Should be interesting.

Less than 100 seats an auditorium??? AND they’re getting Sherlock Holmes instead of Big Newport? Sheesh!

Just read the OC Register article RonP provided via link: apparently your $16.50 gets you leather seats, better concession choices and the privilege to drink beer or wine. There’s no in-theater service like with other luxuary concepts. It also states that four of the seven screens are 3D compatible.

Plenty of rich Del Mar kids go to Cinépolis' $19.50 concept in San Diego. I assume that means the same for Newport.

Of all the Newport theaters, I’ve only been in Big Newport #1, which is great, of course. (Every time I find a chance to see something at the Lido, it’s Scope and I don’t want to watch a cropped image.) Can’t say I’m especially excited to try the Island now that it’s renovated.

I see Mission Impossible: Ghost Protocol is at both the Island and Big Newport.

It was a nice little theater, one I visited quite often throughout the ‘90s. It was comfortable & intimate & served as a nice compliment to the Big Newport across the street.

Can also remember seeing both Peter Weir’s “Fearless” with Jeff Bridges (left theater emotionally exhausted after that plane-crash finale) & Jim Sheridan’s “In the Name of the Father” with Daniel Day-Lewis here.