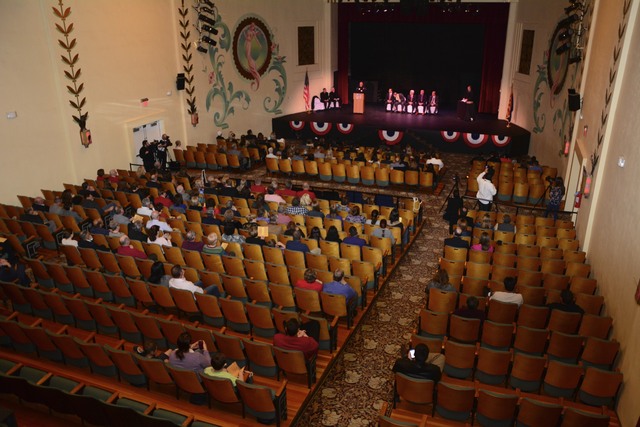 The Yuma Theatre was opened on January 12, 1927 with Thunder the Dog & Virginia Brown Faire in “Wings of the Storm”. The Art Deco style Yuma Theatre originally had a seating capacity of 946. It the 1950’s it was renamed Fox Yuma Theatre and was operated by Fox West Coast Theatres. Today it is still a single screen movie house and is also still open. In 2007 renovation and restoration work was completed.

The link above has this history:
Located on Main Street in the City of Yuma’s central business district, the Yuma Theatre building was constructed in 1912 and originally functioned as a vaudeville and movie house. The Yuma Theatre building has performed an important role in Yuma’s commercial, cultural, and social history ever since.

In 1911, Miss Anna Desmond, a resident of Los Angeles, who had earlier lived in Yuma, and her two sisters, Catherine and Nora owned the property fronting on Main Street. The site was occupied by two small brick and frame store buildings, one housing a laundry and the other, the Parks Plumbing establishment. Deciding to improve the property, Miss Desmond engaged Brooks and Cargill, Yuma architects and on November 2, 1911 a construction contract for a theater building was let and awarded to Charles Olchester, a local contractor. Miss Desmond also arranged to lease the new building to A. J. Zeller of Yuma, one of the operators of the Airdome Theatre located at Madison and First Street.

Known as the Zeller Theater, the building was 50 feet wide and 125 feet deep with a 12 foot high ceiling. The interior was finished in “old mission style” with a seating capacity of 900 on a sloping floor. The Zeller Theater was also the first theater in Yuma to contain fixed seating and to have a raked orchestra. The Theater also had the ability to show motion pictures.

The grand opening for the Zeller Theater was February 21, 1912 with A. J. Zeller operating the theater until about the spring of 1913. At this time, he abandoned his lease and removed the fixed seating. The building was then used for the occasional boxing match with temporary seating.

On September 8, 1913, the Zeller Theater burned in a spectacular fire that destroyed the theater portion of the building. The roof was destroyed as well as the interior, the temporary seating and the “moving picture machine.” Fire damage to the roof framing the store room still exists.

Within three months of the fire, Miss Desmond made arrangements to repair, rebuild and lease the new structure to a new tenant, Riley’s Garage. Riley’s Garage officially opened the first week of January 1914 and occupied the building for eleven and a half years.

In May 1926, Miss Desmond announced she would spend $40,000 to reconstruct the building for theater purposes. Miss Desmond also entered into a 10-year lease with the Arizona movie and theater promoters Rickards and Nace to operate the theater. The Yuma Theatre had the grand opening on January 12, 1927.

Rickards and Nace operated the theatre, using it almost exclusively for films, until January 25, 1936. On that date, a fire broke out in the attic above the stage while an afternoon film was being shown, with much of the theatre portion of the building damaged beyond repair from smoke and water.

Miss Desmond announced that repair of the building would begin at once with the design contract let to local contractor Lee A. Dennis. The design included a new stage, lighting fixtures, decorations, seats, drapes, carpets and a modern cooling system. The lobby and theater were redecorated by the Tony Heinebergen Company and included Art Deco light fixtures with a “wheat shaft” theme and a bas-relief cast plaster mural installed in the lobby. Construction was reported to “run into a considerable sum.”

The Yuma Theatre re-opened on April 11, 1936. In the decades since, the exterior of the Yuma Theatre has gone thru several architectural styles but in 2004 the Theatre’s front facade was restored to its 1912 grandeur. The Yuma Theatre has been in operation almost continuously since 1936. Today, when you enter the Historic Yuma Theatre, you will see an interior decor that has remained virtually unchanged since 1936, complete with two monumental mermaid murals in the audience chamber and the only functioning carbon arc projectors west of the Mississippi.

The above link has various maps of the theater complex and this information:

The Yuma Art Center is the only facility of its kind within a 150-mile radius. Located in the heart of historic downtown Yuma, the Center houses a 640 seat, newly renovated theatre, 3 multi-purpose classrooms, 4 fine art galleries, artist work space, a pottery studio with a kiln, a black and white photography dark room, and an outdoor courtyard for gatherings.

I believe it was known as the Fox Theater for awhile in maybe the 20’s, although I can’t seem to find information to substantiate this.

Just today, 3/11/14, I toured the Yuma Theater and Arts Center, and was fairly dazzled by the wonderfully useful and adaptable spaces with which this wonderful art-deco cinema is now surrounded. The Arts Center provides usable space on both sides of the theater, with classrooms, pottery studios and a theatrical dressing room in the adjoining south building, which being half the length of the theatre also features a patio/reception area to the rear. The Arts Center on the north side of the building also features three spaces, one small space near the street, the 2 ½ story main salle in the middle, and a lower ceilinged space to the rear, above which are the spacious art center offices. The theater is accessible from all sides of the building, and the upper interior walkway features an exposed section of the butressed former northern exterior brick wall of the theater, converted into an interior architectural feature. As the reader might guess, I was very impressed by this excellent restoration, conversion, and repurposement. The theater boasts an active winter schedule, and I was told that many performances sell out every year.

As a special note, the Yuma theater features a lower level projection booth located directly under the lip of the balcony at the back of the stalls seats, which – although it boasts a thoroughly modern digital cinematic projector located between the projectors – is a perfect time-capsule of a projection room of the 1940’s or 50’s. Both carbon arc projectors are in situ, and while not working, only lack one piece of equipment to make both projectors functional. There is no plan to use them, but the room also retains its film racks, with some film still on reels, cutting and splicing equipment, rewinding reels, fire-door, and would make a tourist attraction in itself for cinema junkies.

The Yuma theater now has a functional stage with a 25' depth. While there is no fly-space, or wings to speak of, there is a grand piano if needed, and best of all, is possessed of excellent acoustics. I mean it doesn’t sound either as dead as a door-nail, or as flat as a phone-booth. I recommend this theater for plays, recitation, chamber-music, concert or recital, and probably for anything you care to use it for. I can’t imagine an unpleasant theatrical experience in the Yuma Theater!

I stood out front every year to see the Silver Spur Rodeo parade and that old bucking car painted red.I sold horse and chicken poop out of a old buckboard and I never thought about riding in the parade till today.

I flew out of the old Marsh field and grandma lived about ten blocks from the field below the tracks but today all of that is under the freeway. Grandma would always point out the old wooden road in the dunes but later on the freeway I pointed out to our kids the wooden road and next to it the old as-fault road and the Ten Commandments movie spot in the dunes.

I remember the rodeo and the roller ring at 16th street and 4th avenue two of my favorite places. Also the booms from the test station my wife and kids we lived almost next to it on Kofa Ct.

I just remembered I was in two school drama’s on channel 11 almost when they first went on the TV air. And in the 70’s(?) I was working for Jungwards Electric on 8th street and we rewound a burned out power transformer for them. A few years later I showed my wife a broken down turn up TV station out in the dunes and it made me feel bad for that old place.

I can still see my brother and I in about 52 waiting for the TV to come to life and then the static stopped and a test patter came on and then we waited some more… and a voice came on and then a picture and all of that happened at Pancho’s Rental 1100 8th street were we lived in back of the shop.

We made and installed tons of heavy duty cloth lines in a new tract across from us. I am sure those cloth lines are still there we made them from heavy steam pipe and I did most of the welding.

I wonder if the trailers we made are still being used all heavy steel with wood sides?

If I could spell I would write more but on the way to Carver school I would stop by the canal and fish and the next thing I knew was school was over.

Mac. or in them days I was Butch.

Just a side note: when we took over the Texaco Gas from Mr. Pool it was just a house and station with two hand pumped gas pumps. We added the Wagon wheel restaurant and a large Generator in its own little shack. When I took my wife to see it all was gone but I did find the four steel beams cut off at the gowned were the generator shack was not to long ago. I think when they made the freeway they tore everything down… Mac.

The Yuma Theatre opened on January 12, 1927. The opening movie was “Wings of the Storm”.

During the 1950s and at least into the early 1960s this house was advertised as the Fox Yuma Theatre. The January 13, 1951 issue of Boxoffice reported that management of the house had been taken over by Fox West Coast Theates following an extensive remodeling project costing $100,000. The Yuma had previously been managed by the Rickard-Nace circuit, who owned the theater in partnership with Fox.