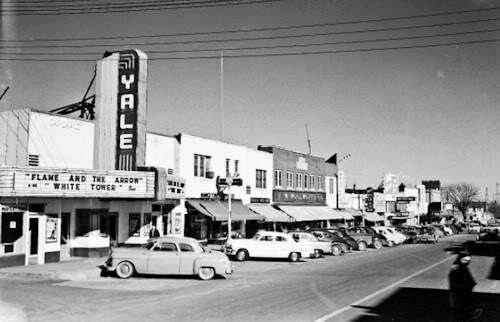 Located in the Capitol Hill area, the Capitol Hill Theater originally opened in 1911 with 500 seats. It was enlarged to 800 seats when it was remodeled in 1946 to the plans of architectural firm Parr & Aderhold. It most recently served as a venue for professional wrestling. In November 2020 it reopened as an event center which also is equipped to screen movies.

Not sure of current status of Yale, I no longer reside in OKC but,
I went by there a couple years back and it looked to be closed as well as several of the near by buildings and stores. Unfortunately,
the entire area was in a state of decline. I did go into google earth and took a look see and there are some indication of it being used for something but, could not read the letters on the marque.

Glad to see that the building is in use. Party House, it was kind of
a party house working with my other teen friends as we had a lot of fun at that theatre and even got paid.
Thanks Chuck!

My dad used to work at this theater in the late 60 to early 70s as well as the Riviera Drive in projectionist for Both theaters at the time.

RGN5SPA, if you see this note, clik on the photos tab at top of page to see Yale Projector Rm photo I added. The machines would have been in use at the time your dad was Yale Projectionist.

Early 1900’s pic of Yale added to Photo Section. Click on pic and enlarge to best view Yale in this pic.

Wow, Looks like Bonnie and Clyde’s old car…Could that be them crossing street in that photo?

New developments for the Yale: http://www.okctalk.com/content.php?r=407-Plans-revealed-for-renovation-of-historic-Capitol-Hill-theater

Cimarron, thanks for the picture, my have things changed guess they use some kind of super HD/blueray disk now no more film and que marks to. Remind you to change projectors. My dad ran yale and the Riverarea theater for a few years his name was Toy if anyone Remembers him and no it’s not misspelled he’s name is really Toy he has since passed.