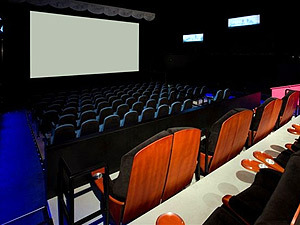 Built on the site of the former Linda Lea Theatre, and utilising a couple of the original theatre’s walls, the new ImaginAsian Center opened on 1st December 2007. The center is a sister venue to the ImaginAsian Center on East 59th Street in Manhattan (NYC).

This is no longer the ImaginAsian Center, but the “Downtown Independent.” Some sparse info at:

I haven’t seen this theater since it was sold. I think the signage is the same as the Imaginasian, though. I will take a look next Monday when I am downtown.

All of the signage has been removed, along with the coming attractions posters. It looked empty.

There is an Iranian film playing there today, per the LA Times. Still going.

A good crowd attended the May 30 premier of an independent pic filmed in Chicago and two shorts. Admission is $10, but if you ask for the “Local” rate you only pay $5. Rates are not posted. Beer and wine are available to take into the theater and the Los Angeles Film Festival will have a number of screenings here.

During part of what I called my “Great Western Trip ‘08”, I found a promotional postcard in the Little Tokyo Visitor’s Center for the premier of an independent film called “Asian Stories”. Being a person attracted to Asian things I attended the event, held on July 25th, 2008, which turned out to be a couple blocks away at the ImaginAsian Center, a movie theater that played only Asian/Asian-American films!

The exterior of the theater was sort of futuristic and neat. As I arrived I found out that James Kyson, an actor in the film who also played the part of “Ando” in “Heroes”, one of my favorite tv shows at the time, would be there for a q&a session.

After the film and q&a, the audience was invited to an after-party at a nightspot some blocks away. (I can’t remember the name or find it where I think it was on Google Street View, even if I look at images from 2008, but I remember a small bar in the front, then an enclosed patio-like area in the back where the party was held.)

At the party I chatted with some of the film’s crew who seemed pleasantly surprised that a guy visiting LA on a trip would have chosen to attend their event. The director introduced me to one of the producers as proof to her that using promotional postcards to attract viewers really does work, (since she seemed to have had doubts, though we wondered if I was the only one they had worked on). I was able to get a photo with James Kyson and tell him I was looking forward to the next season of “Heroes”.

I had a longer conversation with one of the other actors (probably Kirt Kishita). I said he didn’t seem like the tough guy he played in the film and asked him how he was able to get into character. He said he is usually more sensitive in real life and described some of his techniques. We agreed that acting is something that needs to come from the heart, and after we expounding upon this theme for a few minutes, he concluded by saying “We are like brothers”.

Before I left I stopped at the bar in the front, where I talked with a girl who had been in the audience about the movie and my trip. As she reached her drinking limit and her husband came to collect her, she introduced me to him in appreciative tones with some embellishment and flair : “This is Daaaave…. from Miami, Florrrrrida….. and he’s traveling the worrrrrld…. and he’s having the time of his life!”

All this is a pleasant memory.

When I next visited Los Angeles and walked by the theater in August of 2011, I was disappointed to see it was no longer the ImaginAsian (and therefore probably not showcasing Asian films), but at least it was still operating as the Downtown Independent and still had the cool unique exterior.

I had read online there had been another ImaginAsian in New York City, which I now see is part of the history of the closed Big Cinemas Manhattan that has a page here on Cinema Treasures.

The Wikipedia page for the ImaginAsian company says:

“They also operated The ImaginAsian, a renovated movie theatre located in Midtown Manhattan that shows only first-run and classic East Asian films, as well as several film festivals per year. The company renovated a second former movie theatre in Los Angeles that opened in December 2007, the former Linda Lea Theater, which originally showed Japanese films and served the Little Tokyo area before shuttering in the 1980s.”

The Linda Lea has its own Cinema Treasures page, and to me the contrast from the ImaginAsian/Downtown Independent is striking.

Just did a walkthrough of the theater. There isn’t much of the theater that feels historic (besides the location), but it does have a warm, intimate, modern vibe. The lobby is very bright since the entry is all glass and white. I went to the booth and they had two 35mm projectors! Capable of running 1 hour reels on each. The owner seemed very passionate about independent cinema – which is a huge plus!

Still closed as of December 12th, 2021, official website down.