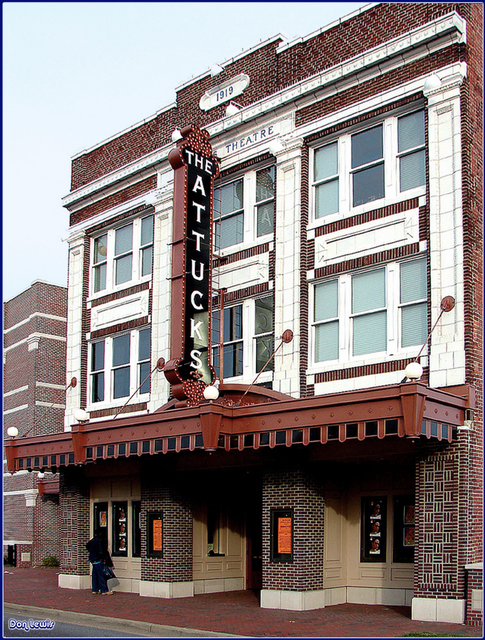 The Attucks Theater has been a landmark for the African-American community since it was built in 1919. It is the oldest theater in Virginia built, owned, operated, and maintained entirely by African-Americans. Originally seating was provided for 835. In 1925 a Robert-Morton 2 manual, 3 rank theatre organ was installed.

The Attucks was called the Booker T at one time. I’m not sure if that is the original name, though.

Two years ago, Armin Schallermeir, Project Superintendent for VIRTEXCO Corp., Bill Hickmann of NRHA, George Falkner, Project Architect of Livas Group and myself stood in the center of the auditorium of the theater. Plaster was hanging off rusted lath, paint was peeling off walls, pigeons flew thru openings in the roof, the balcony was barley stable, and the roof timbers were ready to fall in at any moment.

After two years of hard work involving many long hours of work and sleepless nights, the four of us were able to sit in that same auditorium and for the first time, realized the magnitude of what we were all a part of. Watching a performance where actors and musicians such as Duke Ellington once played, you really begin to understand the richness that the Theater has to offer to generations to come.

Rarely does the opportunity come along to be involved in such event as rebuilding and returning a building such as the Attucks Theater to its former beauty. I will be forever grateful for such an opportunity.

The Restoration of the Attucks Theater has been awarded the 2004 National Award for Excellence in Construction by the Association of Builders and Contractors for renovations between $2 Million and $10 Million.

The theater once stood in a thriving and neat commercial area of shops and eateries.Seeing it sit alone and derelict for so long is just sad.Richmond has a similar area that still survives somewhat with a theater also.Both areas are victims of the same phenom.-the fleeing of middle-class blacks out of the inner city.The big difference in the two areas is the curse of “urban-renewal"passed the Richmond neighborhood by-although it did hit some other parts of Richmond with horrible results.(still hitting Richmond-drive down Broad St.)

The picture just shows the street front,not the big bulk of the bldg.Which brings up the seat figure.It looks like it would hold a lot more than 675 .

My image of the ATTUCKS theater www.flickr.com/photos/lastpictureshow/286343917

Check out their webpage! They’re open! A busy schedule of concerts and performing arts is listed. The auditorium has been beautifully restored with a pink and blue color scheme. Looks great!

I remember this theater as the Booker T. I saw many stage shows there, as well as Saturday morning serials. I’m glad to see it thriving again.

As mentioned before, a Robert-Morton Theater Pipe Organ was installed in this theatre in 1925. It was a 2/3 (manual/rank keyboards/units of pipes). The Robert Morgan Organ Company, home of the “Wonder Morton” was located in Van Nuys, California and was the number two volume producer of theatre organs, building about half as many as the industry leader WurliTzer. “Robert Morton” wasn’t a person, rather the first names of a major stockholders sons.

Does anyone know what happened to the organ?

From Manteno, Illinois, Mile Post 47
on the IC/CN/AMTRAK MAIN LINE OF MID-AMERICA

Architect Harvey Nathaniel Johnson designed the Attucks Theatre in collaboration with his mentor, Charles Thaddeus Russell, the first African American to establish an architectural practice in Richmond. The theater was one of several projects on which Johnson and Russell collaborated.