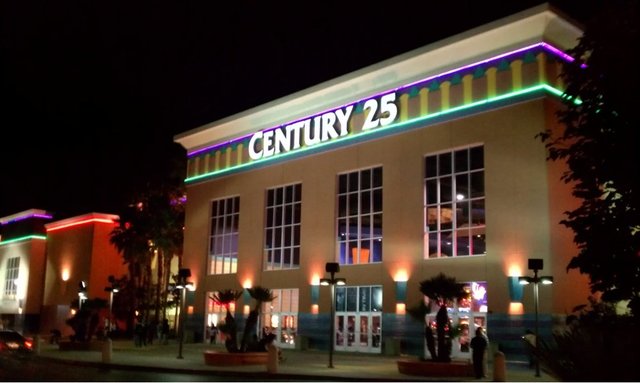 25 screen complex from the West Coast based Century Theatres opened May 14, 1999. It is located in Union City, on the site of the Union City Drive-In, and is part of the Union Landing entertainment complex.

On the old site of the Syufy Union City Drive In. If the Century people were smart they needed to leave the old neon screen tower up in the parking lot of the new multiplex and projected previews on what is coming to the multiplex. No they just tore it down and built a multi cinema on the site. The new Union City Century is listed in Daily Variety in the top ten theatres per week in the USA many times during the month. Even beats out LA or NYC! The Syufy family has kept many of the drive ins they owned that they did not sell to Cinemark. Listed under West Wind DI. To bad they didn’t keep the Union City DI and add a multiplex next to it. Just think of all the money the Syufy/Century family has saved over the years by tearing down the drive ins and building multiplex’s on the same land. The two DI’s the Century people still run in the SF Bay Area in Concord CA and San Jose CA do a big businees many times sold out on the weekends. Glad they still keep them open. The long gone father Ray Syufy must be proud of his two sons for keeping the DI’s still open and didn’t sell out to the candy people at Cinemark. They have no interest in the Drive In world. Just watch out for Wal Mart who loves to tear down old Drive In’s; they will flash big bucks to the Syufy brothers some day. I think West Wind also has a DI in Las Vegas. Did they ever run a print of ‘Showgirls’ at the Las Vegas DI? Must have been a HOT night at the DI! Can you imagine bringing in some girls from the clubs to run the candy counter. Ray Syufy got in trouble many years ago in San Jose CA at the Century Domes for having his own intermission during a single print run. He just cut a film in half so he can sell more candy. The studios found out and cut that out fast. But if he was still around today a built in intermission during ‘Showgirls’ at his Las Vegas DI that had live dancers in front of the big Cinemascope screen stage; talk about showmanship.

Per the box office attendant a few nights ago, total seating capacity is 5043, with the largest auditorium seating 488.

I’ve posted information and photos from a recent visit here.

Auditorium #13 has been converted to a Cinemark XD auditorium. It features Cinemark Luxury Loungers (the other 24 auditoriums still feature standard high back rockers at present). Two other auditoriums feature D-Box seats. Alcohol sales have also been added at this location.