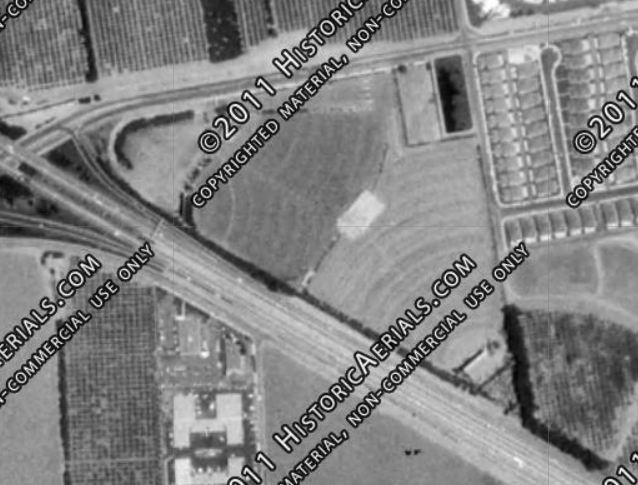 The 1010 Drive-In opened is drive-in opened March 16, 1948 with Ronald Reagan in “Stallion Road” and Dennis O'Keefe in “Mr. District Attorney”. Later two more screens were added. It was closed in 1998 and demolished in 2001. In its later years, the grounds were used for a swap meet.

It parked 800 cars and was owned by 101 Theatre Corp, Reeves Espy was the president of that company.

MagicLantern, you are wrong about its opening date
It opened on March 16th, 1948. Proof is on this page at View link

All of these locations were owned by Pacific Theaters their office was in Hollywood. Richard Benjamin (not the actor) was the 101’s manager for many years- there was a swap meet these every Saturday & Sunday in the 70’s. It was in 1974/ 75 that the snack bar was rebuilt along with other changes that were made.

A number of photos I have seen online that are supposedly the 101 from the 60’s early 70’s are not.

HELP Does anyone know if the pizzas made at these drive-ins were frozen or freshly made? And if you do know, where do the ingredients come from a private vendor or did they buy this at a grocery store? I am trying to duplicate a drive-in Pizza. I can’t seem to find that flavor anywhere else or at any pizza parlor.

Yeah I think now there is a Michaels arts and crafts, Barnes & Noble bookstore and a bunch of little food restaurants. But I still wish the driving was there instead.

What was the last movie playing at 101?

Fanofcomedy - I wanna say Small Soldiers..maybe How Stella Got Her Groove Back..I’m not too sure. My mom, both my sons and I were at the 101 and they couldn’t finish the movie because out of nowhere, the film literally melted off the screen! We went to this theater almost every Friday or Saturday evening…..Memories..so bittersweet!

Boxofice, Dec. 1, 1951: “After 13 years as a United Artists salesman, Jack Drumm has resigned to take over the operation and management of the Big Sky Drive-In near Monrovia, in which he is a partner with Lou Berman. The latter is heading for Ventura to manage the 101 Drive-In, which he and Drumm have acquired from Reeves Espy.”

Boxofice, Dec. 22, 1951: “Lou Berman has disposed of his interests in the Big Sky Drive-In near Monrovia to Jack Drumm and a group of associates, and has purchased Reeves Espy’s interest in the 101 Drive-In in Ventura. Berman will have J. Arthur Drielsma, theatrical architect, and Job Sanderson as partners in the latter venture.”