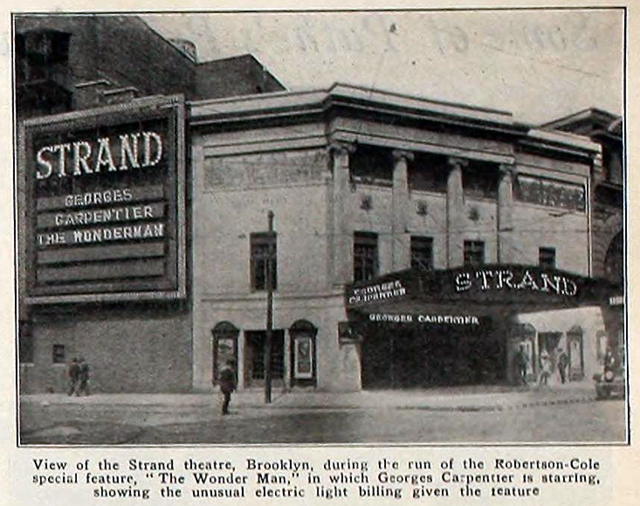 The Strand Theatre stands next to the BAM Majestic (Harvey) Theatre on Fulton Street. Built as a movie theatre and designed by noted theatre architect Thomas W. Lamb, it was opened as the Mark Strand Theatre on August 30, 1919 with the movie “The World and Its Women” starring Geraldine Farrer & Lou Tellegen. It had a seating capacity for 2,940 in orchestra and balcony levels. The stage was 40 feet deep. Initially it was equipped with an Austin 3 manual, 22 rank organ, which was replaced by a Kimball 3 manual 22 rank organ in 1927.

It was part of the Warner Bros. Circuit Management Corp. in the 1940’s, and was sold to Fabian Theaters in August 1948. Independent operators took over in August 1953, and it began screening Spanish language movies. But this was short lived as in October 1953 it became the home to Alfredo Salmaggi’s grand opera company. It was closed in 1959.

The Strand Theatre was gutted internally and converted into a glass factory. This use lasted for several decades, ending in the early-2010’s. The building has been converted into the BRIC Arts Media House which opened on October 5, 2013. The auditorium seats 240, and there is standing space for 400. There is also a large gallery for exhibition, a state of art public access television center and a café.

A vintage picture of the Strand appears below. In addition, you can easily access nearly 400 pictures of old Fulton St. in this terrific attachment.

When I attended Most Holy Trinity High School in the mid-1960’s, our bowling team played its games at Strands Lanes, which was situated above the movie house. This was the closest that I ever came to this theater – and I was a TERRIBLE bowler. More recently, I visited the old theater, which is now being used by the BCAT public assess cable network, as part of a recreation of a walking tour that I had recently conducted. It’s great to see that the old place is still being well used. Enjoy the pictures!

Three years after it was initially announced, it looks like the Strand will become New York’s newest restored Movie Palace though I am hesitant to use the word restored. Certainly, the outside should be restored to the old movie palace standards, but I have yet to see any mention made as to how the interior is going to be “restored”. I just don’t think there is much remaining of the interior to restore. The new theater will be just 250 seats and will also include TV studios. The full article appears below in today’s Real Deal but also appears in most of the local papers in a addition to the Wall Street Journal. It is great news nonetheless!

Leslie Schultz, executive director of BRIC Arts, and the Strand Theatre Downtown Brooklyn’s Strand Theatre, a former vaudeville playhouse built in 1918 at 647 Fulton Street between Ashland and Rockwell places, is set to receive a $40 million makeover, the Wall Street Journal reported, an indication that long-delayed development plans for the Brooklyn Academy of Music Cultural District are getting underway.

The renovation has been in the works since 1996, a few years after two arts groups — UrbanGlass and BRIC Arts | Media | House — moved into the space. The project received a funding commitment from the city at one point, but that fell apart after the attacks of Sept. 11, 2001.

“The merit for the project has never been questioned,” said Leslie Schultz, executive director of BRIC, which runs the Celebrate Brooklyn! music festival, but securing funding has been difficult.

Ultimately, around $33 million was contributed to the project by the Bloomberg administration, the Journal said. The state gave nearly $2 million and private donors provided $5.5 million.

It is expected that the renovations will be complete by 2013. The complex will house three new galleries, a 250-seat theater, a television studio and shops.

Just got some new info. It appears that this theater is refitting rather than a restoration. There will be little to nothing inside evoking its past life as a movie palace though, there appears to have been precious little (if anything) to save. At least the exterior will heaken back to the day and there will be a theater inside though the seating will be just 250; a far cry from the original 2,950 in the intro. This space will not be any competition to the Kings Theatre.

This morning some ladies and gents held a groundbreaking at the old Strand Theater, the stalled and un-stalled BAM Cultural District project turning it into something we assume will be super-modern and media-heavy called BRIC House. As mentioned yesterday, LEESER Architecture is heading the design portion of the makeover, and they’ve released some shiny new renderings to show what it will look like once those columns are wrapped in text and artists are blowing glass left and right. LEESER won the $20 million bid from NYCEDC back in 2008; the center is now scheduled to open in 2014.

This blurb appears in today’s Wall Street Journal and reveals that there is nothing or architectural merit that remains in this old theater:

Failing to gain respect as a historic building, the Strand Theater on Fulton Street and Rockwell place is being re-imagined as a non-classical temple for the digital age. “If this was a historically important piece of architecture, we would have treated it that way. But it is not,” says architect Thomas Leeser.

Nice slap by Leeser at his archtiectural forebears. I think the main facade is a rather handsome one and I’m hoping that they retain the columns and Latin inscriptions. I’m sure whatever architectural significance the original interior once might have held was likely shorn away years ago.

None other than Thomas Lamb, I might have added. I would argue that any of Lamb’s extant work should be deemed historically important.

My great grandfather, Abraham Schlesinger, listed the Strand Theater as his workplace(said he was an, “actor in vaudeville”) on 9/12/1918. This was listed on his WWl draft registration. He had his mail sent to a,“B.Sharp” at the theater. Curious to know if this B Sharp worked there at the time.

When opened it was known as the Mark Strand Theatre, which was told to me first in 1969 by a matron at the Granada Theatre. When older I saw the Mark Strand ads in the Eagle. This matron also worked at the Stone, Stadium, and the Supreme as well as the Ambassador Theatres in Brooklyn. Her name was Betty and she was a doll and wonderful woman.

Search engine doesn’t recognize Brooklyn Strand as a name. And why is it listed as located in Fort Green, when it was one of the most important theatres in Downtown Brooklyn?

The boss was unable to get in 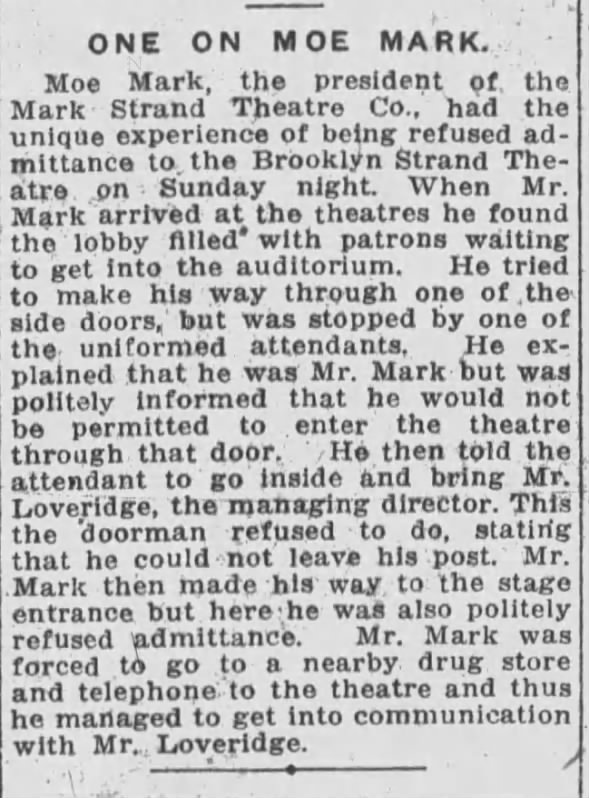