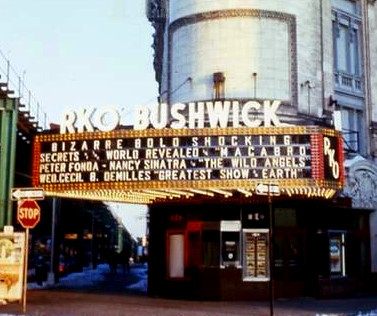 The Bushwick Theatre opened on September 11, 1911 and was operated by Percy Williams as a vaudeville theatre. It became part of the B.F. Keith’s chain in 1912. In the summer of 1926 a Wurlitzer 2 manual 8 ranks organ was installed. B.F. Keith operated the theatre until 1930 It became a movie theatre for the RKO-Keiths chain in 1930 and operated until closing in 1969.

Church use followed, for a period of time, then the building fell into disuse and decay for decades.

A high school opened within the shell of the former theatre in March of 2004.

Unfortunately, when I returned from my vacation, I found a response to my “landmark the RKO Bushwick” request in my mailbox. Specifically, the Landmarks Commission noted that, since the building is “too significantly altered to meet the criteria for designation” it will not be recommended for designation.

Given the Commission’s interest in designating other – and frankly less imposing – facades such as the Bushwick and the Shore, I was more than a bit perplexed by this decision.

If anyone wishes to take up the torch on this issue, I would certainly welcome your interest.

In reviewing my last message, I noted a mistake. Specifically, I wished to reference the RIDGEWOOD – not the Bushwick – as a theater whose facade did not architectually match the Bushwick’s. Sorry.

On Tuesday 13 February 1951, Bela “Dracula” Lugosi presented his in person Horror and Magic Stage show at RKO Bushwick. Currently I am conducting research on all things Lugosi; if anyone out there actually saw this show and/or has memorabilia (poster, handbill, photos) related to this show, please contact Bill at Thanks in advance for any assistance!

Hello Lugos, while I cannot help you on this, since I was only one yeat old at the time, your comments raised a few questions that I hope you can address. First, given the fact that this was, at least in part, a “magic show”, was Lugosi actually some sort of a magician as well as an actor or was the “magic” aspect just part of the show? Also, were these 1951 performances made in conjunction with the release of one of his recent movies or were they free standing events – or did they accompany the showing of another movie in which Lugosi did not appear? I know that by 1951, live stage presentations at most movie houses were pretty much limited to celebrity appearances made to boost attendance for the celebrity’s most recently released film, which was being presented on the same date. Did the Lugosi appearances fall into this category or were they somewhat different?

And best of luck on your research.

Wurlitzer’s records show that they shipped a 2-manual, 8 rank pipe organ, Style F, opus 1390 to the Bushwick Theatre in Brooklyn in the summer of 1926. This implies that the Bushwick had started showing movies by that date.

To John Dereszewski, sorry for my delayed comment. Lugosi was not himself a magician. He had a magician accompany him on these “spook shows”. Generally Lugosi would do three or so separate Dracula scenes with the magic done in between those scenes. On occasion he would help with some of the tricks and sometimes participated in the blackout portion of the show. One of his old Monogram films from the Forties usually was the film on the bill.

Thanks so much for your response. I hope your research is yielding fruit.