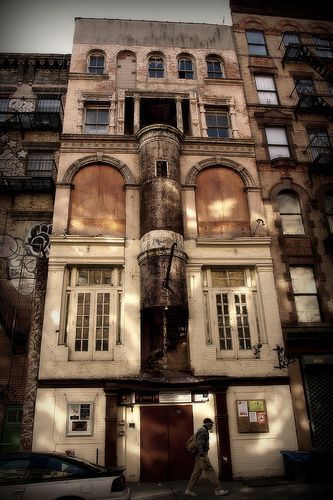 Located in New York’s East Village, the building was constructed as a social hall in 1889. In the 1930’s it was converted into a theatre and was used for a time as a Yiddish theatre, and later as a TV studio known as the Astoria Theatre. It became an off-Broadway theatre known as Theatre 62, and in 1967 it became Channel One Video Theater.

By 2013 it was operating as the DMac Theatre, a performing arts centre which also screens some movies.

As far as I know, this was a theatre owned by none other than Andy Warhol in the late sixties. It did indeed show adult fare and had the distinction of having Joe Dallesandro (Warhol Superstar) be a projectionist there as well have a revolving door of male clients who visited Dallesandro during the show.

This was an off-Broadway house called Theatre 62 for a while, but in July of 1967 it made the national news as the Channel One video theater as a showcase for the satirical “Channel One Underground Television” productions that eventually became the 1974 motion picture THE GROOVE TUBE (named after Channel One’s fourth production, a compilation of the best skits from their three previous shows “First Production,” “Second Production,” and “Fugue Tube”). The theater had three 21-inch b&w television sets hanging from the ceiling that showed the Channel One programs on closed-circuit videocassette (usually 90 minutes in length). “The Groove Tube” show became so popular in 1969 that a second theater was added (Theater East at 211 East 60th Street) and soon the Channel One founders – Ken Shapiro & Lane Sarasohn – were franchising the tapes to college campuses and performance spaces across the country. I think Channel One moved out in 1970.