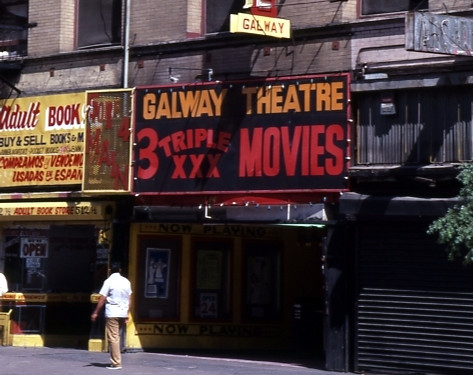 I ran across this while perusing Something Weird Video’s “60’s Go-Go Chicks Vol. 5”. There was a short clip of S. Main Street in L.A. and this was the only theatre I could identify.

It was operating as an adult movie theatre until its closing in the late-1980’s. It is now used as a community services office named Chrysalis with the old hotel rooms reporposed into their original use.

Here is the theater building in a photo taken yesterday:
http://tinyurl.com/ow2fcr

The Galway, as seen in 1972 in this newly unearthed clip of the Rolling Stones shooting the cover for Exile on Main Street

I remember the Galway; never was inside though. I worked for Walnut Properties/Pussycat Theatres for a long time and serviced the projection equipment at the Optic several times. It seems to me that it was across the street and a few doors away but I can’t remember in which direction. That was back in the ‘70s through the '80s and those memories are getting dim (a stroke didn’t help much either). I always found that old part of town really interesting. A lot more history down there than folks realize.

In the 1959 Universal-International release “Too Soon To Love” we get Jennifer West and Richard Evans on Main Street. They’re looking for an abortionist. Note the bottoms of the illuminated “Galway” letters above the “open all night” banner.

It was an interesting comment about a theatre to be called the Sherman mentioned in the 1915 LA Times article you quote in your 2007 post.

Zimas gives a 1905 date for the building that later housed the Galway at #514.

A shot of this theatre appears in the film “Parts: The Clonus Horror.” The film later got the MST3K treatment and Mike and the bots make reference to it.

If anyone has any stories about going to/ working at this threatre, I would love to hear them. I am chronicling the histories of adult theatres in the US. Please contact me at Thanks!

From Google Street View (October 2013), the building is still there, the front has been recently repainted and the four store fronts are “Leonide Hotel”, “Chrysalis”, “{vacant}” and “{Vacant}”

IS the auditorium space still there?