Playtime During the Previews? Playgrounds Are the Latest Movie Theater Accessories 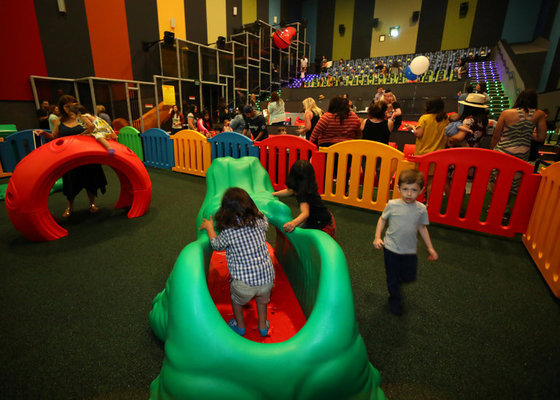 From The New York Times: To sell more tickets, some movie theaters have introduced seats that tilt, spin and rumble to match the action on the screen, devices that spray water and pump scents and salted pretzels the size of steering wheels.

Recently added to that list: playground equipment in auditoriums to cater to 3- to 12-year-olds.

Cinépolis, which has more than 4,900 auditoriums worldwide, last month introduced Cinépolis Junior at theaters in Los Angeles and San Diego.

They are equipped with a 55-foot-long and 25-foot-high play structure with two slides and two platforms with “wobble hoppers” (similar to stationary pogo sticks) and “stand n’ spins” (smaller versions of merry-go-rounds). A separate area enclosed with a colorful fence has green lawn turf and plastic animal sculptures for climbing and crawling.

There is a 15-minute intermission during which the children can play. An attendant monitors the play area so children do not enter while the movie is showing, a company statement said.

The auditoriums have unconventional seating, with oversize bean bags and pillows and poolside-style lounge chairs, as well as more traditional seats. Introductory ticket prices are $1 more than standard tickets, though prices vary by location, time of day and seat type.

Only movies rated G or PG are screened, so no “The Fate of the Furious” in between trips down the slides. Children must be accompanied by an adult, and adults must be with a child 12 and under, the company said.

What is the allure for parents to bring children to a movie theater and incur the expense of tickets and snacks instead of staying home and watching a movie?

Mr. Elizondo’s rationale: “You can watch only so many movies at your house. At some point, you just want to leave the house.”

Watching a movie at home cannot compete with watching one in a theater, he said, adding, “Only a movie theater can completely take you out of everyday life.”

The company opened its first Cinépolis Junior in Mexico in 2014 and has introduced the amenity to more than two dozen sites in Costa Rica, Guatemala, Mexico and Spain.

While Cinépolis has introduced playground equipment to movie theaters, it is not the first to try to attract parents. Other theaters host “Crybaby Matinees” and “Diaper Date Nights,” times when parents with babies are welcome.

The company acquired the two California theaters in February 2015 and spent $1 million to convert the auditoriums, which opened to packed houses largely on the strength of family-friendly movies, such as “Beauty and the Beast,” “The Boss Baby” and “Smurfs: The Lost Village,” Mr. Elizondo said.

The openings also coincided with spring break for schools. “It was a crazy March,” he said. “It’s been a great few weeks.”

Patrick Corcoran, a spokesman for the National Association of Theater Owners, said he did not know of any other indoor movie theaters to offer amenities like Cinépolis Junior.

“It’s one more way of expanding the audience,” he said. “The idea that there is only one moviegoing audience is kind of obsolete.”

With the junior auditoriums, the company hopes to attract a segment of the market that has seesawed in the past few years: people with young children. The number of frequent moviegoers — those who go to the movies once a month or more — ages 2 to 11 decreased to 3.1 million in 2016 from 4.3 million in 2013, according to a report from the Motion Picture Association of America. It was up slightly from 2015.

Jacqui Saldana of the blog Baby Boy Bakery visited one of the auditoriums and wrote that the play area allowed children to “get their wiggles out” before a screening and families to enjoy a visit to a movie theater “with ease.”

Faith Popcorn, the chief executive of BrainReserve, a marketing consulting company, who has written on consumer trends, was skeptical that the concept would catch on.

“What happens when kids get noisy, get into fights, get injured?” she wrote in an email. “It’s not going to be a happy cocooning experience for anyone in that theater.”

With virtual reality and augmented reality expected to explode into a multibillion-dollar business by 2020, the future is not in movie theaters but instead is “in headsets and a new kind of immersive experience — way more intoxicating and addictive than climbing on a jungle gym while a kiddie movie plays,” she wrote.

Visit our site also to learn about our Los Angeles Conclave this June! 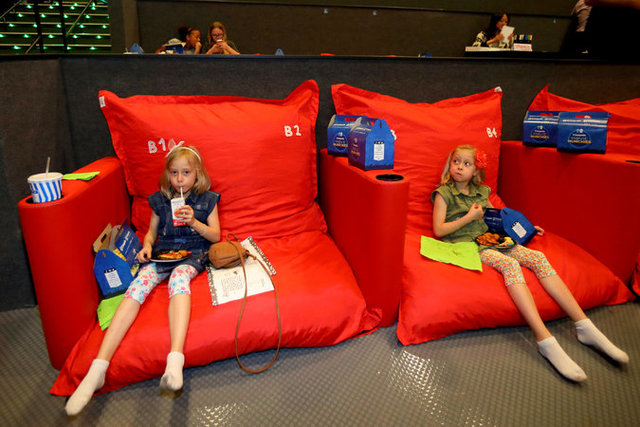 As a child I had a pretty short attention span, but seeing movies in the theatre probably helped expand it. This might be a good way to introduce kids to the movie theatre the first or second time, but at the same time I think its ridiculous. If kids can no longer see a movie without a playground to use before the movie and during intermission(what movies are long enough to require an intermission anymore?), how are they ever going to do grow up and work all day? And people wonder why so many people text while driving, or during a movie!

I enjoyed reading your post; it was really helpful to me. If you have any spare time, you may play among us with me.