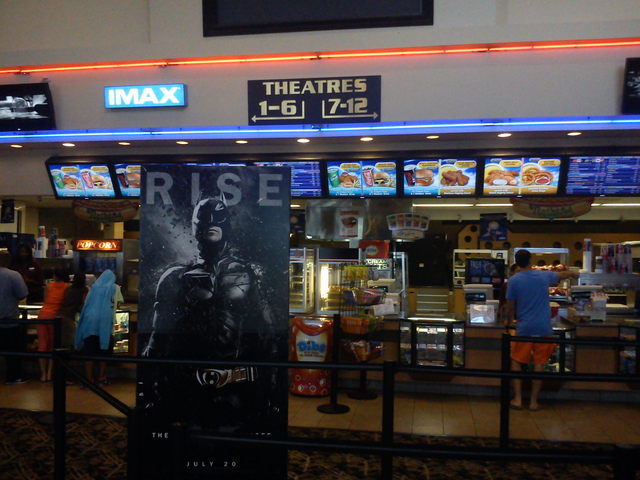 Built on the site of the beloved Westbury Drive-In, this is one of the better UA constructions of the last few years. The one nice thing they did do was to keep the Drive-In’s original 1940’s marquee and adapt it for the theatre. The UA Westbury 12 was opened on December 10, 1999 with 2,350-seats. This capacity was reduced to 1,387-seats when recliner seats were installed in 2018.

Haven’t seen an IMAX film here yet but the projection, sound, and sight lines at the Westbury Stadium are pretty amazing. My favorite theater to see a movie these days. Not beautiful like an old movie palace, it makes this up by delivering crystal clear images and staggering sound. Better than any theater in Manhattan. Very impressive.

It’s been a while since I frequented theaters in Manhattan, but as recent as 4 or 5 years ago, the projection and sound quality at the Loews Lincoln Square was top notch. And a good print at the Ziegfeld, with full curtain work by a union projectionist who gives a damn, is always a special treat.

Forgot to add, however, that I do agree with you about the quality (not to mention comfort) at the Westbury Stadium 12. It is my movie theater of choice on Long Island.

Went to this cinema for the first time today. Saw “Brave” in 3D and Dolby 7.1. I don’t know what people are saying about crystal clear images and staggering sound.

First of all, the auditorium (#9) had a red Exit sign ON THE SCREEN (lower left side of it). Since this was a scope film, this was very annoying, to see a little red “EXIT” hover over the screen as if it were some television logo bug. The black levels, as with most 3D presentations, were kind of washed out with the glasses that I was removing and putting back on my 3D wear to see if I was missing any dark areas, and apparently, I was losing I think 5 or 10 percent of contrast. Or perhaps I am spoiled with the Barco and Christie setups around where I live. The sound was pretty off-putting. Although the eight channels of sound is always a nice treat, it seemed like the LCR channels were EQ’d to a point where the bass was non-existant and the treble was cranked. The LFE channel was still in use, I think, but the stage speakers still sounded very shallow. The projectionist fixed this problem during the middle of the film, but throughout the film, some parts sounded very brittle that afterwards I had an ache in my left ear. But this is my first experience there, nonetheless. Maybe it was just an off presentation, all theaters have at least one of them in their lifetime.

I’m willing to give this theater another try. Pics coming in a moment.

So a few weeks ago, I went to the Westbury Stadium again to see “The Amazing Spider-Man” in LIEMAX 3D (auditorium #2). Picture and sound were far superior than my unfortunate experience with “Brave” at the same place. There was some ghosting when the first 3D trailer started (“Frankenweenie”), but this was fixed right away. I have to say this was the best LIEMAX I’ve ever been to, and it even beats the LIEMAX in Tyson’s Corner Mall with its “gigantic” screen and all its problematic performances. Hooray Westbury Stadium!

I saw “Jurassic Park” in 3D there. It was awesome.

The RPX theater (Regal’s large screen format) has very good sound, with an Auro 11.1 sound system and a fairly large screen. From what I could tell, the RPX screen is about the same size as the IMAX screen here, and both have about equal sound from what I could tell. I would definitely recommend RPX, especially as an alternative to IMAX since it is a bit cheaper and RPX has both 3D and 2D showings, whereas IMAX usually only has 3D.

Please update, total seats 1387, this theatre was installed with recliners in 2018