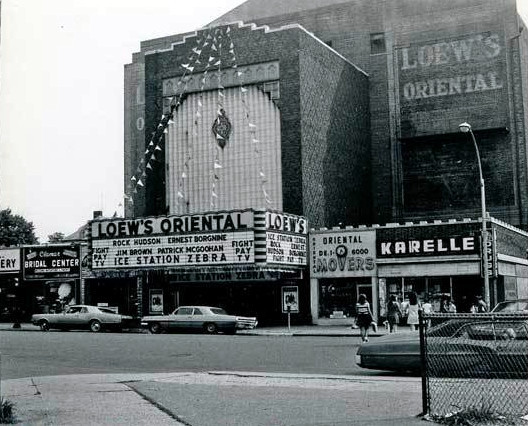 Opened on October 13, 1927 with Ronald Colman in “Beau Geste” and vaudeville on the stage. The Loew’s Oriental Theatre was known for its lavish Oriental style décor. It was equipped with a Robert Morton 3 manual, 13 rank organ.

It was twinned in February 1977 with 1,076 seats on the orchestra level and 1,140 seats on the former balcony level. In February 1984 the balcony was divided into two auditoriums, making the theatre a triple-screen operation. It was closed on May 21, 1995.

The Loew’s Oriental Theatre has been converted into retail space, a common occurrence with many of the remaining theatres in New York City.

Fascinating clip-as are most from the Nelson Sullivan vid archives-of a train ride to Coney Island with Nelson Sullivan, a young NYC columnist/writer Michael Musto and friends in ‘87. Besides marveling at their train’s state of disrepair, look out for their train passing the Oriental marquee at about 4:25 in this clip. Film titles showing then are easy to read. Hope you enjoy this forgotten slice of long ago NYC. https://www.youtube.com/watch?v=JN4ATDfCYmo

According to the NYC AGO website, this theatre was built by the Picker family and later taken over by Loew’s along with the Boulevard, Spooner & Burland in the Bronx. Here is the Link: http://www.nycago.org/Organs/Brx/html/LoewsBoulevardTheatre.html

I wouldn’t place absolute faith in the claim that the Picker family built the Oriental. Perhaps movie producer David Picker, a direct descendant, could verify or deny. I know that the Pickers were pioneers in Bronx cinema history, but a lavish showplace in the outer reaches of Brooklyn seems too much of a stretch for them.

Yes, I thought it seemed a little strange as well, that’s why I posted it. The only company I can find on the NYC Dept Of Buildings certificates of occupancy is “Hawthorne Amusement Corp.” perhaps other members can shed more light on this.

According to a bit in the February 11, 1927 issue of the Motion Picture News, Plans were being prepared for the erection of a theatre building at 1832 86th street in Brooklyn. The owner was the Hawthorne Amusement Corp., which was located at 1540 Broadway in Manhattan. It mentions Marcus Lowe was its president.

If you click the link, this is in the first column, just under an announcement that plans were being prepared for another Brooklyn theatre. That one was demolished this past summer.

Toward the top of the next column, one will discover that plans were also being prepared for this theatre in downtown Brooklyn.

Also mentioned were plans being prepared for a theatre on Fulton Street, note the slight difference in the address with what’s listed on CT.

walterk, Thanks for the clarification, 1540 was the Loew’s Theatres Headquarters Building, so it seems like the Pickers has nothing to do with the Loew’s Oriental. On a side note, according to the new book that just came out on the Loew’s Kings Theatre, Dorothy Solomon Panzica one of the best Managers Loew’s Theatres ever had was the manager of the Loew’s Oriental right before she became manager of the Kings, anyone remember her here at the Oriental with any stories to share?

Could I find information on some movie theatres in Motion Picture News?

If you mean the trade journal Motion Picture News, yes! But depends on what theatres you’re interested in. Some might never have been covered.

I added a mid-1940s picture to the Photos section.

Grand opening ads for the Loew’s Oriental and the Universal theatres in the photo section.